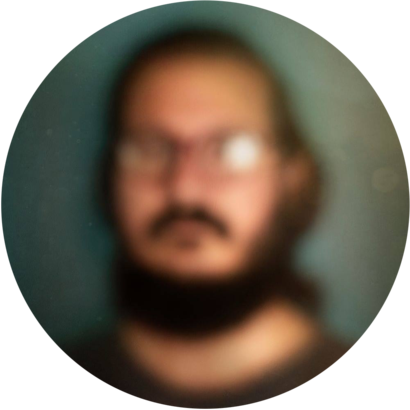 Hernández Binz considers that all human beings are born as artists. Since he was a little kid, he entertained himself drawing and doing activities with his own hands. He was enthusiastic about carpentry and discovered the satisfaction of creating something out of nothing.
At fifteen, he started playing in a punk rock band. This experience caught him so much that he wanted to become a professional musician, but his parents thought differently and did not insisted.
He studied a more conventional career, convincing himself that this would give him a better future. At this time, photography and painting were already a passion and a fundamental part of his life.

In order to give his professional career a more artistic turn, he studied a master’s degree in Graphic Design in Barcelona. Like music, he thought photography as a career, but instead he thought design would provide that security he had inherited.
Upon his return to Mexico, and with very few expectations, he applied for a vacancy as a photographer at a renowned hotel in the Riviera Maya. This job gave him the necessary knowledge to start a career as a wedding photographer, which he did for the following eight years.
Simultaneously, he began searching for his own style experimenting with photography in an artistic way. Weddings gave him experience on the technical side, while art gave him freedom to express himself.

His journey through the impressionist and abstract world began unexpectedly. One day, while walking with his camera, he accidentally pressed the shutter, generating an image full of color and movement. The result took him back to the moment him was standing in front of a William Turner Painting at the Museo del Prado and he longed to paint like him.
This opened a door full of possibilities. Many times the results looked like oils and many other as watercolors. They moved him so much that he began to practice it consciously. Instead of finding himself painting with a brush, he was doing it through a camera. He was then attracted by the work of the great impressionists of the past, and started to study and admire them.

Art is freedom, it allows him to determine himself, get out of the conventional, break the rules, and find beauty and inspiration in what is not defined. His work is the personal reflection of a constant search for authenticity and to be different. It invites you to observe the world from an alternate perspective and fall in love with something more ethereal.


Other works by Hernandez Binz