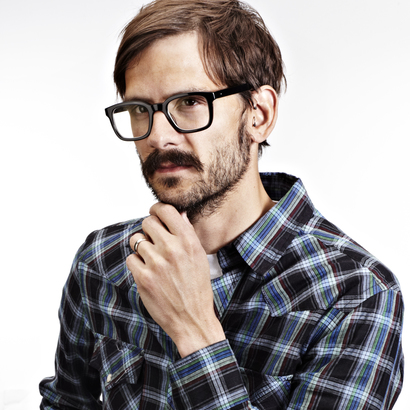 Aaron Jones was born in 1978 in York, Pennsylvania and was educated at Pennsylvania State University were he received a Bachelor of Arts degree in Communications. While never receiving any formal education in photography, Aaron took up the art form to document a cross country trip while relocating from York, Pennsylvania to Portland, Oregon, ultimately ending up in Denver, Colorado where he as lived and worked as a photographer and photo stylist since 2005.
Unsatisfied with conventional photography techniques and subjects, Aaron began to experiment and stretch the boundaries of traditional photography by blending sculpture and photography into one. He began to experiment with light and color and was soon transforming simple objects into vibrant, colorful, abstract images. The subject matter he photographs is created in his kitchen using a variety of techniques and only exists long enough for a photograph to be taken. Other then some minor retouching, the images remain unaltered from start to finish; what he sees through the lens is what the viewer sees as a photograph.
Aaron has shown his work in numerous galleries through out Denver, with the highlight being a “Best in Show” winner at Denver’s Space Gallery for which he was a awarded a solo exhibit. The Westword’s art critic described Aaron’s work as “…very smart-looking and strikingly eye-catching”. Space Gallery’s owner describes his work as “compositions that are unique abstractions akin to microscope or telescope surveys appearing both infinitely small and astonishingly vast”.


Other works by Aaron Jones