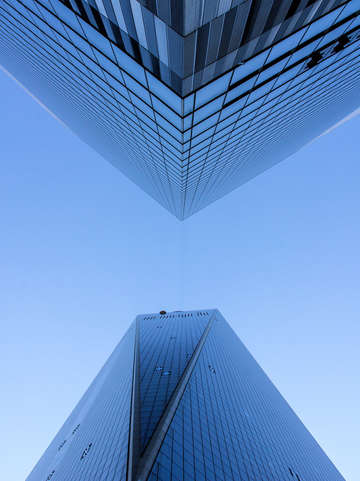 This image also includes the first office tower to open on the site, 7 World Trade Center.

One World Trade Center is the main building of the new World Trade Center complex in Lower Manhattan. On the site of the original 6 World Trade Center, it became the tallest building in New York City on April 30, 2012 – surpassing the height of the Empire State Building. At a total height of 1,776 feet (a direct reference to the signing of the Declaration of Independence), it is currently the tallest building in the Western Hemisphere, and the fourth tallest in the world. The design is a collaboration from Master Site Planner Daniel Libeskind of Studio Libeskind (New York) and a building re-design by David Childs of the famed Skidmore, Owings & Merrill (Chicago). 1WTC includes sustainable architecture and much of the building’s structure and interior is built from recycled materials. Around 80% of the tower’s waste products are recycled and the building implements a rainwater collection and recycling scheme for its cooling systems. It is expected to receive the LEED Gold Certification making it one of the most environmentally sustainable skyscrapers in the world. The World Trade Center is principally owned by The Port Authority of New York and New Jersey, and the first office tenant, Condé Nast, began moving into their new headquarters in November of 2014. The three-story One World Observatory opened Memorial Day Weekend of 2015.