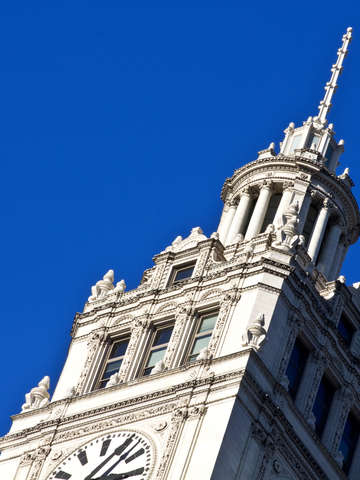 The Wrigley Building was built as the corporate headquarters for chewing-gum magnate William Wrigley, Jr. It was designed by Chicago's largest, and arguably, most important, architecture firm of the time. Anchoring the brand new Michigan Avenue, construction started while the new Michigan Avenue Bridge was taking shape extending Michigan Boulevard across the Chicago River, spurring new development and extending Chicago's main business district.

The first tower, the South Tower, was completed in 1921 and is adorned by one of the world's most famous clock towers, and the North Tower was completed in 1924. The building was inspired by the Giralda Tower in Seville, Spain and is covered by glazed terra-cotta tiles custom made in England, which are hand-washed and computer monitored. A second aerial walkway was added in 1931 in the Art-Deco style. When complete, it was Chicago's first air-conditioned office building. It is currently finishing renovations after being purchased by investors including Groupon co-founders Eric Lefkofsky & Brad Keywell.