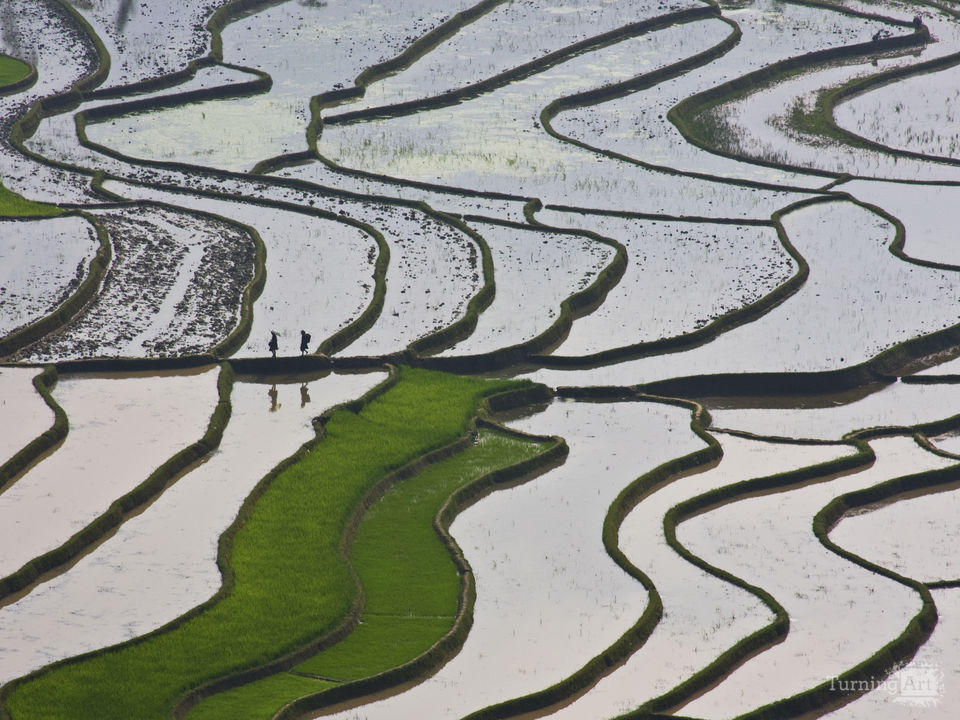 Seen from afar, two workers walk through the sprawling rice fields of North Vietnam. I captured this scene during one of my first photo shooting trips to Vietnam.

Near the end of a 2005 trip to Vietnam, I found myself looking at a sweeping display of 1960-70s era news magazine spreads with big, captivating photos. These original pages from Life, Look and the Saturday Evening Post chronicled the Vietnam War and hung in multiple display cases at the War Remembrance Museum in Ho Chi Minh City.

Seeing the big spreads of dramatic news photos sparked an epiphany with me – one that would shape my personal life and fine-art photography for years to come.

Even though the magazine news features were about 40 years old, I could remember having seen them during high school. In fact, news coverage of the war and the anti-war movement had galvanized my decision to be a newspaper journalist. And now, four decades later, they were reaching out with an important new inspiration: A one-off vacation trip would be the first of many visits to work on a lengthy project that would become my first photography book: Vietnam 40 Years Later.

Gallerists and editors say my portfolio of Vietnam images solidly stands with one foot in the world of documentary and the other firmly planted in the realm of fine art. As a life-long journalist, this feels like a perfect description. However you categorize the work, it achieves its purpose: the images show viewers what happened to this Southeast Asian country since the highly controversial and violent war ended four decades ago through a collection of carefully crafted, fine-art photographs.

The images have won recognition in photo contests and 10 prints were acquired by the U.S. Library of Congress for their collection. Vietnam 40 Years Later was published in 2014 by Damiani Editore of Bologna, Italy, one of the world’s leading publishers of art books.

Since then, I’ve taken-up other projects, as I seek to grow and develop as an artist. Nevertheless, Vietnam remains a key interest and I am looking for ways to update his project, as the 50-year anniversary of the war’s end will roll around in 2024. Thus, I think of it as a living project.