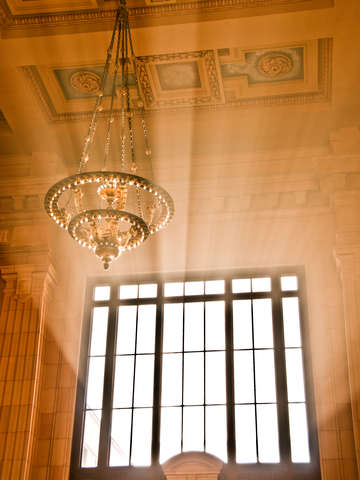 Union Station Kansas City is America's second-largest train station, after Grand Central Terminal in New York. In the early days of Kansas City's station the huge building had no air conditioning and windows were wide open in the summertime. Lots of dust from the city wafted in. Steam engines huffed and puffed airborne particles into the interior, and lots of passengers and visitors smoked. Consequently, it was a common occurence to see beam particles of sunlight streaming across the enormous Grand Hall. After the restoration was completed in 1999, air conditioning and a sophisticated air scrubbing system was installed. Windows were sealed shut, the station was buttoned up tight, and the phenomenon of particles in the air bouncing around on sunbeams was hardly seen again. Until some unusual occurrence like an indoor barbeque event or, as in this case, an unfortunate fire at one of the station's restaurants. No one was harmed in the fire and it was quickly extinguished. But I was able to catch a glimpse of what it must have looked like back in the day.