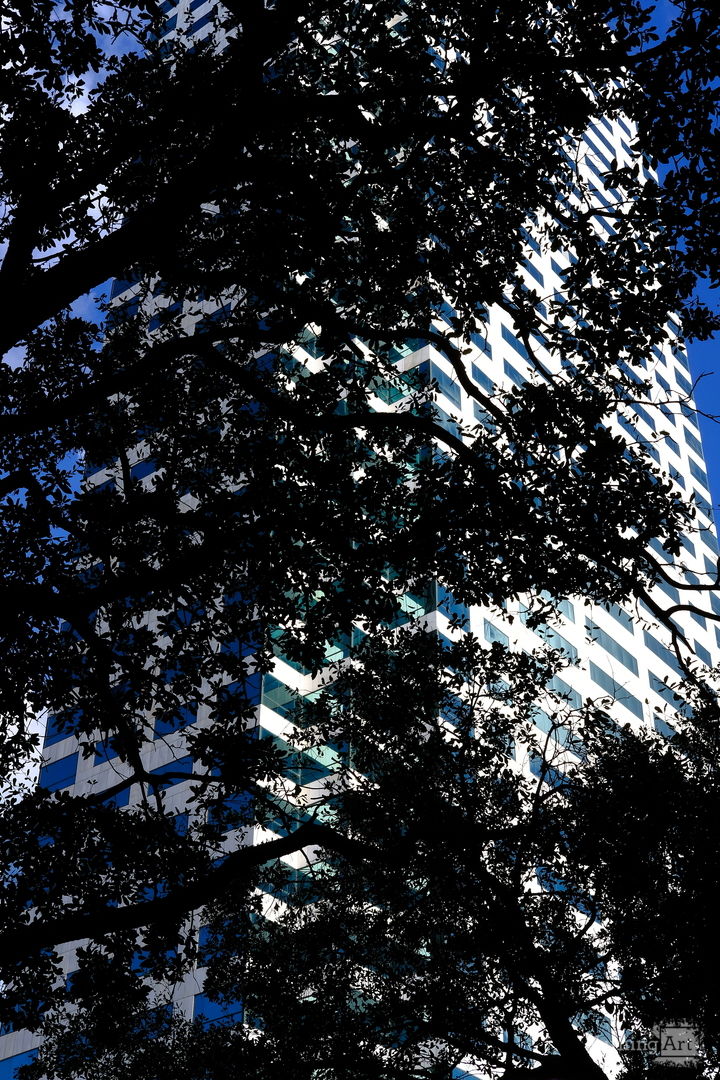 On a short stroll through Downtown Tampa during an especially warm afternoon, I looked up when a bright light hit my eyes and fell silent as I watched a building be consumed by nature; and how lovely the silhouette of the leaves looked as they danced around the fixed lines of the building.

Other works by Rafael Migoyo

Ubiety: “the quality or state of being in a place.” The work I present is meant to further a conversation about how our collective timelines come together to create our individual identities.
We are born into ubiety, growing up and celebrating life before it begins to fade. We think not of our consequence, and even less to the causality of our actions. So when you look at my work, simply ask this, “What led to this?”

Rafael (Ravimi) was born in La Habana, Cuban in 1992. His father risked his own life in order to provide a better life for his family and journeyed by raft during a storm to the United States. Rafael and his family finally entered the United States and sought political asylum when Rafael was five years old. Most of his family still resides in Cuba, but Rafael often returns to visit his family in Cuba where his roots remain strong.

Rafael’s talent as a photographer began to emerge when he was a junior in high school. While attending a Jesuit school for boys, he was appointed Head Media Director of the robotics team. He was awed by the power of the camera lens that captured the energy of the robotic competitions. The camera became more than just a tool in his hands. The camera was able to capture stills of life, including life’s sorrows, joys, and wonderment.

Rafael’s connection with the camera was forever changed. His hands and his eyes were one with the camera, and his energy was fused with the lens of the camera. With or without the camera, he focused on faces, objects, and places, all of which took on emotions that offered him alternative perceptions from what he was accustomed.

Even his first camera, a simple small point and shoot Casio EX-FH100, was an extension of himself rather than a tool. He examined thousands of images, researched many famous photographers, and invested thousands of hours into perfecting his art. None of his images has ever been post camera edited.

His current focus is art photography, but he considers portraiture, landscape photography, and photojournalistic images among his specialties. His work and interests remain broad though because the world offers so much opportunity to capture and immortalize fleeting time.

Rafael’s camera lens has taken him to Cuba, Puerto Rico, and Columbia. He was invited by the Director of the Photographic Arts Museum to exhibit his work for the 500th anniversary of the Cuban province, Sancti Spiritus in 2014. The invitation remains in effect for future showings. Rafael’s camera lens has taken him throughout Florida where he has captured the beauty and the wonder of the state.