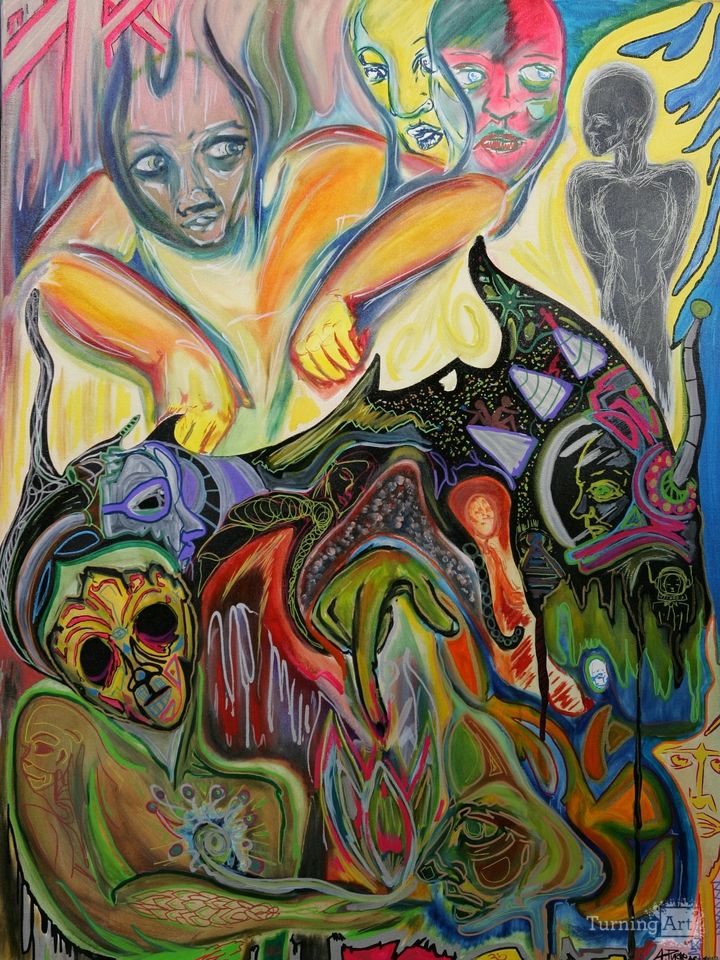 untitled (Based on a Dream)

My interpretations of dreams and visions, Untitled because I believe the viewer will develop their own story..Evoking feelings

Alex Puryear has always used art as an escape. “Painting is my own personal Never Land” the up-and-coming Chicago artist explains, “As a Surrealist stuck in reality, escape is my only option.” And Puryear’s work is nothing if not a fantastical break from a humdrum reality. Utilizing dazzling colors and bold strokes lines, Puryear’s paintings tend to focus on dream analyses and outlandish interpretations of his own thoughts, feelings, and experiences.

In many of Puryear’s works, the title will be absent. “I want the viewer to give the piece meaning, to give it a story, a life.” He muses. “I want them to make it their own.” However, with themes ranging from redemption to aphrodisia, each piece is unquestionably personal to Puryear. So personal in fact, that he likes to incorporate a piece of himself into all his work. Be it a subtle symbol such as the allegory-laden lotus flower, to a more conspicuous self-portrait of a fedora adorned individual, Puryear’s literal influence is never lacking, despite his desire for outside interpretation.

And it is juxtaposing ideas such as these, which define a majority of Puryear’s work. The constant contention between fluid and concrete, worldly and ethereal, austere and indulgent, lends each piece a noticeably vibrant essence that can only come from melding such opposing ideologies. By subscribing to a multitude of thoughts and emotions, be they conflicting, his work is prevented from becoming stagnant, culminating instead in a lush canvas blooming with vitality.

Puryear himself is much the same; balancing the humble, forthright charmer with the lofty, esoteric virtuoso, all the while with the added burden of being a surrealist dreamer stuck in an incontrovertible reality. But much like his paintings, these contradictions fuse effortlessly, creating a singularly remarkable work of art.