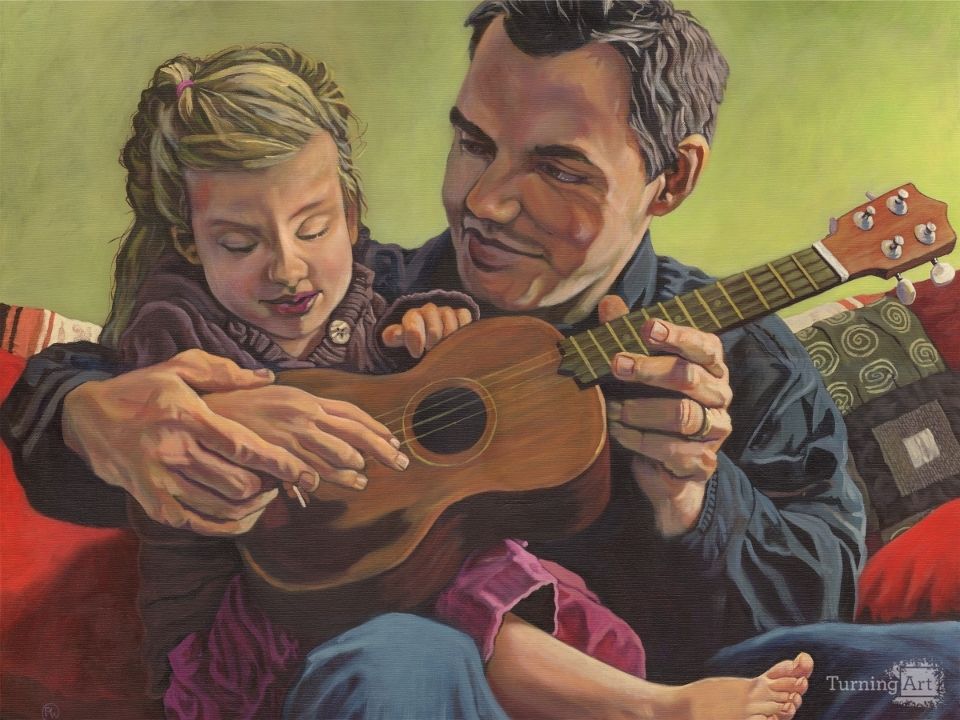 I've always been attracted to images that tell stories. I prefer images that don't merely provide visual summaries taken in a brief glance and then forgotten, but rather ones that upon further reflection can tell of even vaster and grander things simply with their hues, contrast and depth. It is my endless endeavor to likewise tell stories with my paintings that in some ways are very literal, but have a greater resonance beyond the obvious. My intent is to create a sort of hyper-realism where the colors have tastes and the fabrics, fruits and flowers almost waft out to stimulate all the senses while actually only being observable by one; sort of an art-induced synesthesia.

The Ukelele Lesson
While clearly a modern setting, I attempted to give a timeless feel to my interpretation of 'the music lesson' often found in classical art. I love the warmth and serenity of this piece, the bemusement on the father’s face as he gazes upon his daughter and her intrigue with this strange new toy.

Other works by Paige Wallis

Paige Wallis grew up in Huntsville, Alabama where her mother often told her that she 'carried the art genes' from her great grandfather, Alfred Lowe. Lowe had not only studied at the Museum of Fine Arts School in Boston but later became the senior restorer there for over two decades. Paige's family relocated to Toronto, Ontario while she was still young. Paige attended the Etobicoke School of the Arts, an arts based high school, where she began her formal arts education as a visual arts major. She later returned south to further pursue art at the Savannah College of Art and Design in Georgia, receiving her BFA with a specialization in illustration. In her final year at SCAD, Paige received an honorable mention in the Society of Illustrator's Student Show for her piece "The World's Smallest Bird" as well as SCAD's Award for Excellence in Illustration.

Paige's preferred media are watercolors and acrylics and she pursues very different painting styles in each medium. Her watercolor pieces tend toward a traditional, realistic style where she works to create bold and solid images that accurately represent minuscule, real-world details. Paige's acrylics, on the other hand, have a more modern, pop-art edge; a result of the freedom she feels in the acrylic medium to be more loose and playful. Paige uses the opportunity to punch up the color intensities and play with the dimensions of the pieces she creates.