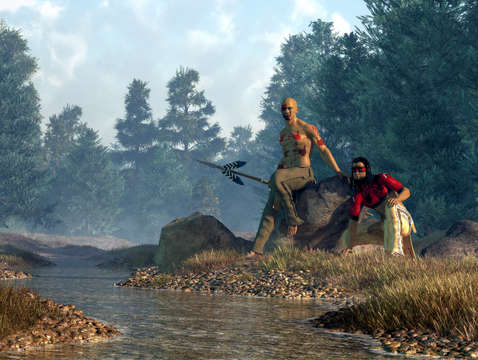 One of the most common legends among American Indians is that of the Twin Heroes. The basics of the story is that a pregnant woman is murdered. The murder is sometimes portrayed a monster, sometimes a person – it varies from one version to another. After murdering the woman, the killer cuts the boys from her womb, leaves one in the dwelling, and throws the other outside. The father returns and raises the one left inside to be civilized. He usually goes by the name Lodge Boy, but other names include By-The-Door, Village Boy, and Dore. Meanwhile, while the other grows up in the wild, and his name is Thrown-Away, but he is also known as Wahredua, Wild Boy and Spring Boy among others. Eventually, the father and Lodge Boy catch and partially tame Thrown-Away. The two boys then have various adventures together with personalities mirroring their upbringings.

I got the idea to depict this twins while doing research into Native American folklore. Their stories appear quite often, and I find it amazing how many there are and how different each one is.