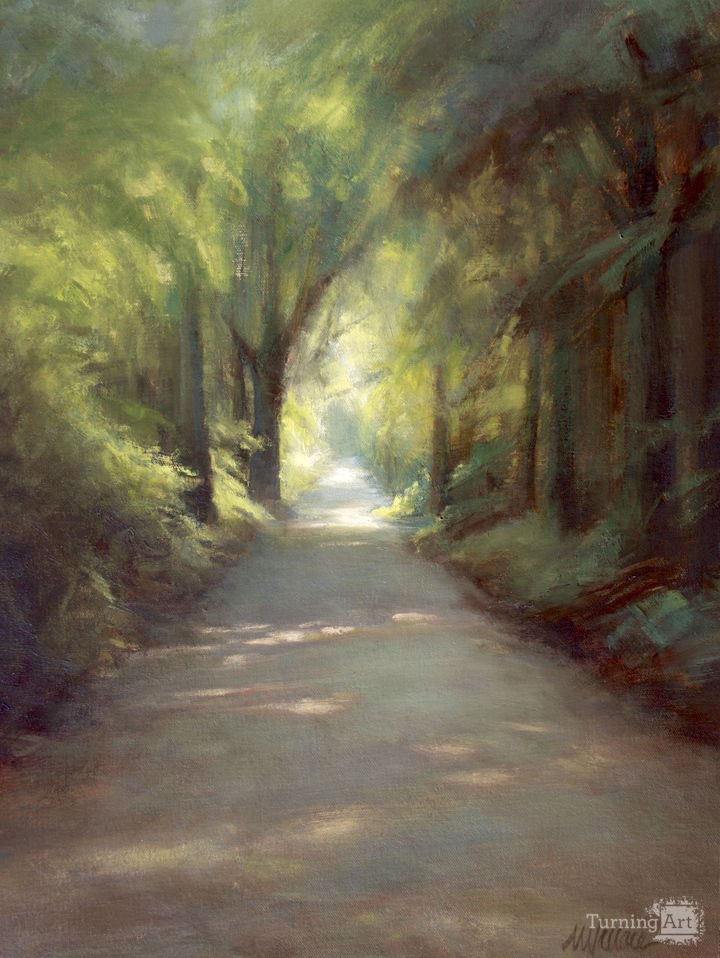 The quality of going back into deep space into light was what I was after in this painting. The design of the light and shadow, along with certain colors were made to guide the viewer's eye down the road. The spots of light on the road hint at that the bright light of the clearing. I used the light coming through the trees to create a circular motion which would keep the eye at the part of the painting that suggests a light filled opening.

Other works by Nancy Wallace

Nancy was born and raised in Cleveland, Ohio.

After receiving BS and MA degrees in art education, she taught art for many years, including a two year position at an international school in West Berlin in the 80’s. Upon her return, Nancy lived in the Washington DC metro area for over twenty years where she worked as an art teacher and arts administrator, eventually devoting most of her time to painting. From 2000 on, she got the plein air bug, and began showing and selling her work.

She has won many awards over the years, including many best of show awards in juried competitions. Nancy’s work has been represented in numerous galleries. What she loves about painting:

“It’s a language. You are the country where that language is spoken, and to communicate your visual ideas you have to get at what it is to be human. Mixing and choosing colors and applying them to a carefully prepared surface is an intentional, yet intuitive experience.”

Nancy studied for years with Rick Weaver,who received his formal art training in New York at the National Academy of Design, The New York Academy, and Art Students League and is therefore part of a lineage of great artists and teachers from Robert Beverley Hale onward.

She lives on a farm in Charlottesville where she and her husband engage in another pursuit: home and garden design.