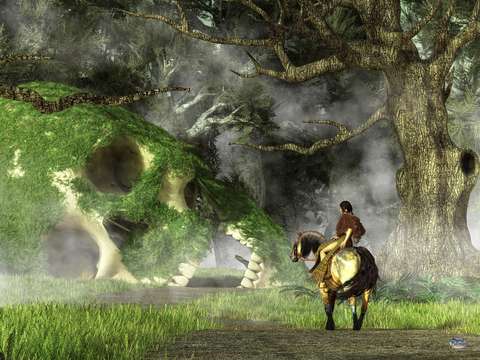 A giant skull covered in moss lies on its side in a dense, misty forest. A path in the woods goes right through it's mouth. On this path, a woman in a short fur shawl rides a pale horse with a black mane and tail towards the skull. She appears to have stopped through, awed by the site of the massive skeletal remains of the giant that are before her.

Giants occur quite often in Native American folklore. One of the most well known is the Windigo, also call Wintiko, Kee-wakw, and Chenoo among others. From story to story they vary in sized and appearance, but can sometimes be very large. Generally they are said have once been human but transformed into monsters as they turned to cannablism. Sometimes they are incased in skin made from ice or stone. Another recurring legend about them is that their original human form in encased within the giant's heart.