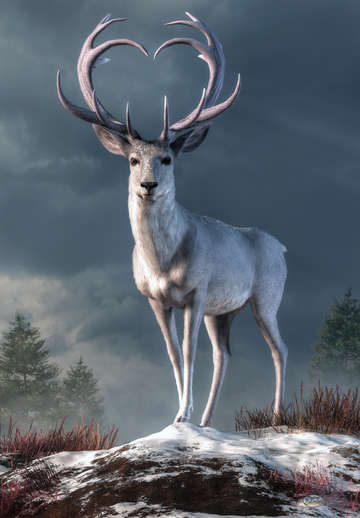 On a cold winter day, under a dark moody sky, a majestic animal stands atop a snowy hill.  An all white stag with a massive set of heart shaped antlers gazes directly at you with a dark eyed stare.  It's as if this great deer is the king of the winter wilderness.

The white hart is a symbol of the English king Richard II.  In English Folklore, the white hart is often associated with Herne the Hunter and many pubs bear the name "The White Hart". Hart is actually an old term that is now rarely used for a mature stag.

I've created a few scenes before featuring white stags, but they were generally realistic.  For this scene, I wanted an image that bordered on fantasy, as if this were not a real deer but rather is more of a spirit of nature.