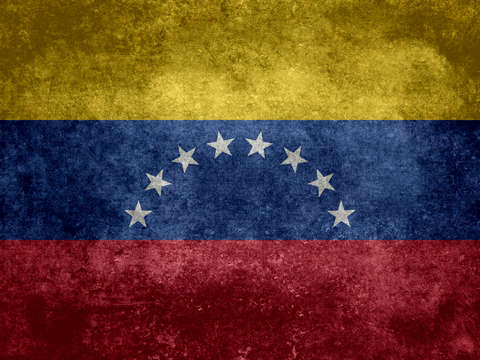 The national flag of the Bolivarian Republic of Venezuela - Vintage version

Venezuela, officially called the Bolivarian Republic of Venezuela, is a country on the northern coast of South America. Venezuela's territory covers around 916,445 square kilometres (353,841 sq mi) with an estimated population of approximately 29,100,000. Venezuela is considered a state with extremely high biodiversity, with habitats ranging from the Andes mountains in the west to the Amazon Basin rainforest in the south, via extensive llanos plains and Caribbean coast in the center and the Orinoco River Delta in the east.
Venezuela was colonized by Spain in 1522 despite resistance from indigenous peoples. It became one of the first Spanish American colonies to declare independence (in 1811) but did not securely establish independence until 1821 (as a department of the federal republic of Gran Colombia, gaining full independence in 1830). During the 19th century Venezuela suffered political turmoil and dictatorship, and it was dominated by regional caudillos (military strongmen) well into the 20th century. The country has had democratic governments since 1958; before that, like most countries of Latin America, it suffered some coups and military dictatorships. Economic shocks in the 1980s and 1990s led to a political crisis causing hundreds of deaths in the Caracazo riots of 1989, two attempted coups in 1992, and the impeachment of President Carlos Andrés Pérez for embezzlement of public funds in 1993. A collapse in confidence in the existing parties saw the 1998 election of former career officer Hugo Chávez and the launch of the Bolivarian Revolution, beginning with a 1999 Constituent Assembly to write a new Constitution of Venezuela.
Venezuela is a federal presidential republic consisting of 23 states, the Capital District (covering Caracas), and Federal Dependencies (covering Venezuela's offshore islands). Venezuela also claims all Guyanese territory west of the Essequibo River; this 159,500 square kilometres (61,583 sq mi) tract was dubbed Guayana Esequiba or the Zona en Reclamación (the "zone being reclaimed").
Venezuela is among the most urbanized countries in Latin America; the vast majority of Venezuelans live in the cities of the north, especially in the capital, Caracas, which is also the largest city in Venezuela. Since the discovery of oil in the early 20th century, Venezuela has been one of the world's leading exporters of oil and has the largest oil reserves. Previously an underdeveloped exporter of agricultural commodities such as coffee and cocoa, oil quickly came to dominate exports and government revenues.