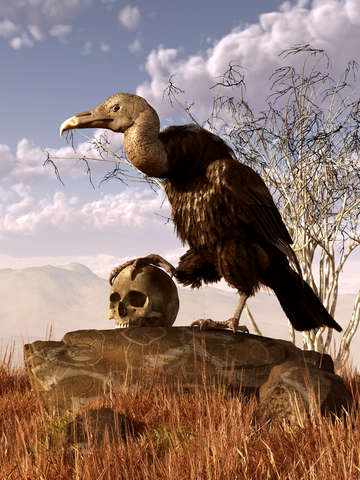 A Huge American Black Vulture stands proudly upon a rock resting in a grassy field. It is late fall the and grass has turned a golden yellowish-brown. Behind the vulture sits a leafless bush, framing the bird's black body. Hazy hills can be seen in the distance lying under a blue sky filled with puffy white clouds. An old weathered human skull rests on the rock before the vulture, and he puts his claw upon it like a conquering hero. He says aloud: "Alas, poor Yorick! He tasted good."

Here in North Georgia, I used to never see vultures. Rather, crows seemed to fill their niche at devouring dead animals. But over the past few years I've spotted black vultures more and more alongside the road. For this artwork, I just wanted to really do a simple portrait of a one such buzzard (note that, in America, the terms "Buzzard" and "Vulture" are synonymous). Despite their lowly reputations, they can be quite smart and are a very useful bird (at least, at cleaning up the road kill, that is). They do, at times, tend to be a bit clumsy though, and can be loads of fun to watch.