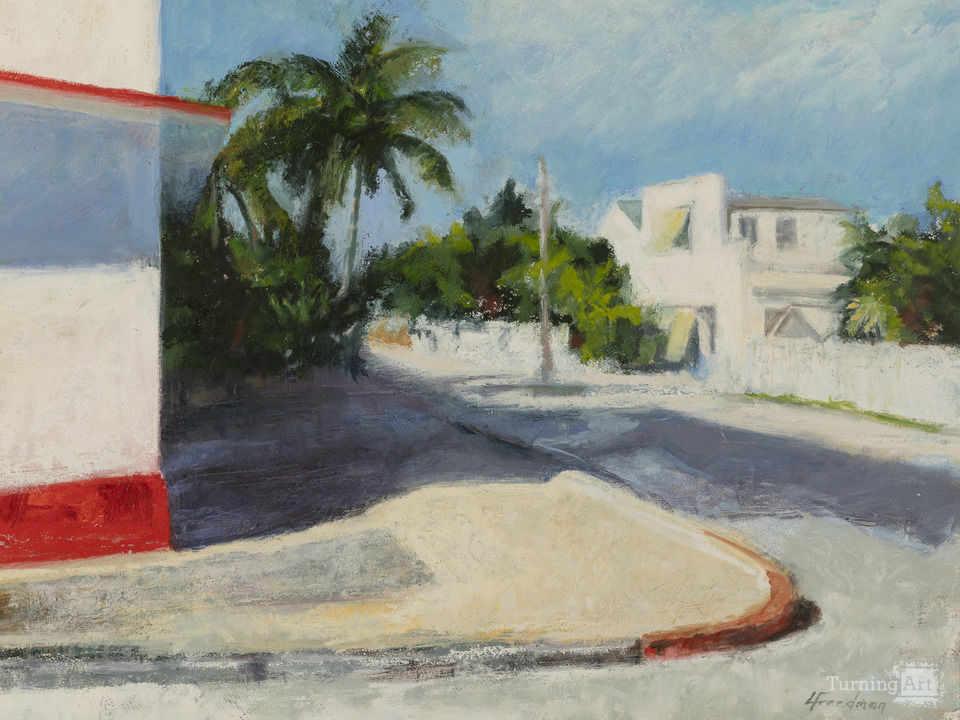 On a bike ride along Catherine Street, I came upon this wonderful red and white Propane building and the interesting white home across the street from it. The scene typifies the unexpected, beautiful sights I encounter in Key West Old Town.

Other works by Lindsay Freedman

Lindsay studied law at NYU Law School and practiced law full-time in Ventura, California for many years. During that time, she studied art at Ventura College and UC Santa Barbara.

After moving East in 1991, Lindsay studied with Ron Boehmer at Beverly Street Studio School and Rick Weaver at McGuffey Art Center in Charlottesville, Virginia. Lindsay has shown her art in solo gallery shows and received juried awards throughout Central Virginia. She has served as Academic Chair and a Board Director at Beverley Street Studio School and is an Associate Member of McGuffey Art Center.

Studying law informed Lindsay’s approach to painting, as both disciplines require an accurate expression of ideas. Using paint rather than words, she focuses on whether a developing image is expressing her idea about the subject matter. She considers a painting finished when the intended message feels complete and authentic.

Lindsay chooses subjects that grab and maintain her interest. They may suggest a narrative, raise a memory, evoke a feeling or present a tantalizing challenge. She enjoys finding subjects that suggest a theme for a series of paintings—allowing her to address issues in early thematic compositions, and then experiment with subsequent paintings.

Her career highlights include: