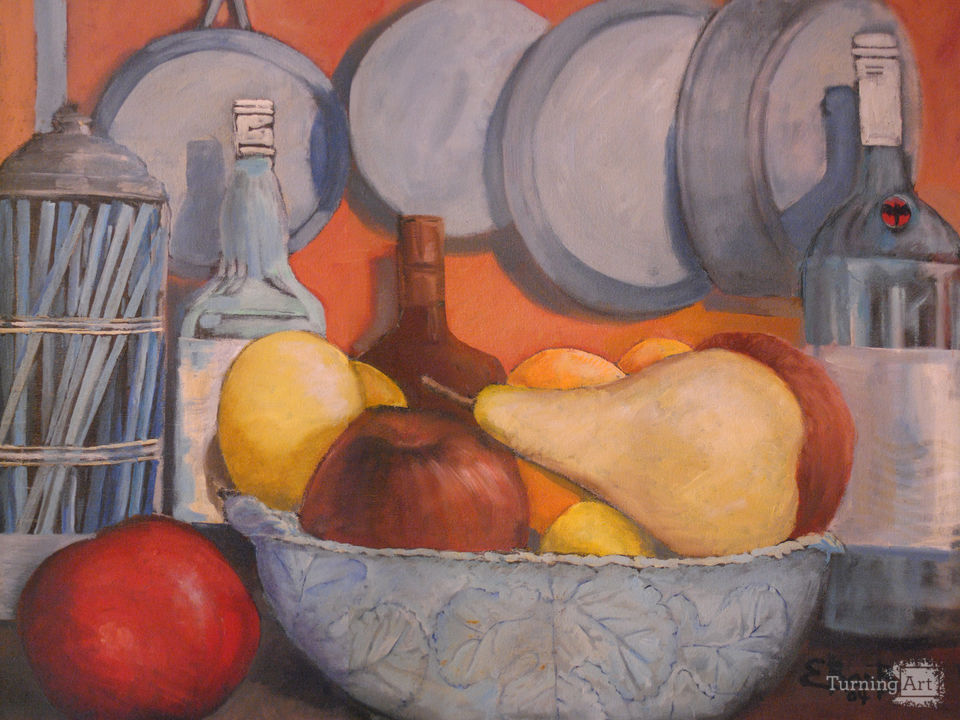 Painted for a still life group show at Saint Francis College in Brooklyn Heights, this painting captured a corner of my kitchen where meals where prepared, drinks were mixed and conversations blossomed. The bottles and fruit bowl sat upon an old butcher block that I inherited from the previous owners of my 1848 Brooklyn Townhouse.

Other works by Louis Ebarb

A product of Brooklyn, New York and a member of the Choctaw-Apache Tribe of Ebarb, Louisiana, the painter Louis Ebarb draws on his complex mix of cultures to create his images .

Working as an Abstract Expressionist in the 1960s, Ebarb studied painting at Pratt Institute where his style reflected the emerging Minimalist Movement. In 1988, he incorporated his training in abstract art with the concepts of the American Realists of the early twentieth century and began to document his experiences and time through his unique rendition of Urban Realism. While the earlier American realists encountered their images as newspaper artists, Mr. Ebarb established his style through the lens of his still and video cameras.

Beyond painting, Mr. Ebarb has worked on many creative endeavors. He has worked as a theater craftsman, animator, illustrator, graphic designer, production designer, art instructor, video producer, and video director.

Louis Ebarb's work has changed based on his constant shifts in interests, needs, obsessions, and circumstances. Many of his paintings can be seen on the website: www.LouisEbarb.com

The "Street Dance" series features street scenes and architecture, both simple and elegant. As a continuing series, Street Dance is an homage to the nobility of work, survival, and pleasures of contemporary urban life by elevating the commonplace to fine art.

The "Brooklyn Bridges" series (2006 to 2010) was both a metaphorical and an emotional bridge to span the transition from parent, homeowner, and husband toward a life of less social demands and greater opportunity to travel.

"Travels With Louie," Ebarb's current series, is intended to be a travelogue that shares the joy and wonder of exotic and familiar places first hand. The visual variety and beauty of my full time travels supply the images.

Future plans include seeing more of the world and translating that expanded visual experience through watercolor paintings.