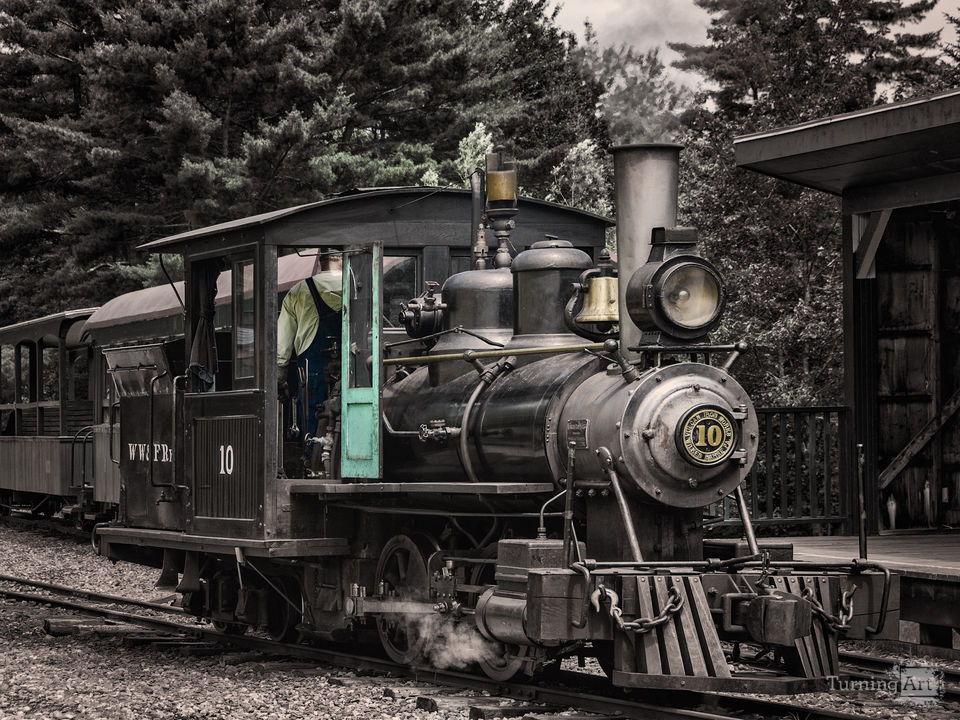 The Wiscasset, Waterville & Farmington Railway in Maine is a beautiful recreation of the two foot, narrow gauge operations that ran all over rural Maine in the 1930's. Locomotive #10 is almost dwarfed by its crew, and at the same time has a beautiful elegance.

Other works by Andy Dolph

When Andy looks at a locomotive, he knows it's a machine, but feels that in many ways a steam locomotive is as much alive as a person or animal – they breathe, they have personality and moods (just ask any steam engineer). He says, "For me they have a magic I find hard to describe, I just don't have words for how I feel around them. It's that magic, that experience that my work is about."

This is not a new thing for Andy. As a three year old, visiting his grandmother in Belmont, Mass. he would hear the horn of a locomotive and go running to the kitchen asking to be lifted up to stand in the sink so he could see out the one window that faced the tracks. Today, he's still likely to go chasing the sound of the horn, or the steam whistle.

In retrospect it's natural that he would make fine art images of railroads, trains and related subjects, though it took me a while before he put the pieces together.

As an artist, he happily embraces whatever tools are available for the creation of evocative images. For Andy, standing with the camera and "taking a picture" is really just the first step in making an image. While some of his work is more or less straight from the camera, a much larger group has been processed, manipulated and shaped into something that goes far beyond the original. He sees the original file from the camera as raw material for creatin art.

A "finished" piece exists as a digital file only, until it's truly finished by being photographically printed, infused into a sheet of aluminum or printed as a fine art giclée on watercolor paper.