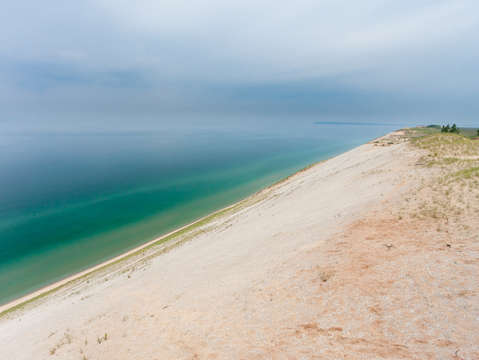 Sleeping Bear Dunes National Lakeshore is a United States National Lakeshore located along the northwest coast of the Lower Peninsula of Michigan in Leelanau and Benzie counties near Empire, Michigan. The park covers a 35-mile-long stretch of Lake Michigan's eastern coastline, as well as North and South Manitou islands. This Northern Michigan park was established primarily because of its outstanding natural features, including forests, beaches, dune formations, and ancient glacial phenomena. The lakeshore also contains many cultural features including the 1871 South Manitou Island Lighthouse, three former stations of the Coast Guard (formerly the Life-Saving Service) and an extensive rural historic farm district. In 2014, a section of the park was named the Sleeping Bear Dunes Wilderness by the United States Congress.