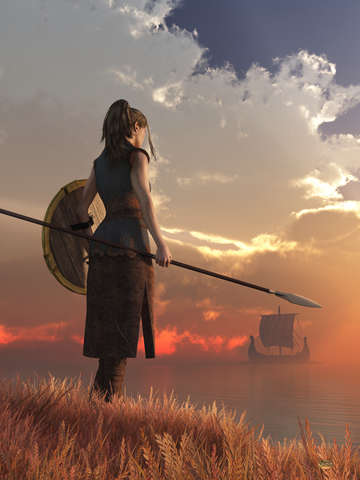 A woman warrior stands on a grassy hill looking out to sea.  The sun is low in the sky, casting the clouds in red and orange.  This female fighter, armed with shield and spear, and wearing a mail shirt for armor,  appears ready to deal with what has just appeared on the horizon:  a Viking ship.

Shield-maidens were women warriors of Scandinavian stories and folklore.  They are still quite popular in modern fiction and film as well in both historical dramas, such as the show "Vikings" and in fantasy, such as "The Lord of the Rings".  There is some debate among scholars as to weather there were actual shield-maidens, but archaeological finds and historical accounts seem to lend credence to their existence.

One of my favorite book series is Bernard Cornwell's "The Saxon Stories" which is also a TV series called "The Last Kingdom".  I've been working my way through season 4 on Netflix and had the idea to a bit of art inspired by it.

I really like the way the sky turned out in this one, especially how the most reddish clouds line up with the raider's ship to make it look like the dragon head on the prow is breathing fire.
Buy a Print
Buy the Original