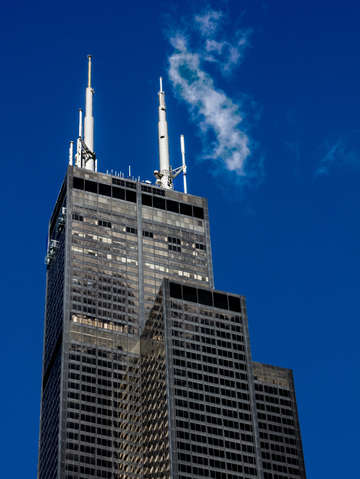 The Willis Tower in Chicago is arguably still and forever known as Sears Tower (despite a name change in 2009 as part of a leasing agreement). This 108-story 1,451 foot tall super tower designed by the super team behind the John Hancock Center, Bruce Graham & Fazlur Kahn, this building opened in 1973 as the Tallest Building in the World – a distinction held for over 25 years until the Burj Khalifa opened in Dubai. It was then the tallest building in North America until One World Trade Center topped out at 1,761 feet in 2013., but remains the tallest superstructure in the Chicago skyline. The Skydeck observation level opened in 1974 but has undergone several remodels including the recent addition of The Ledge in 2009 and a gift shop and cafe, Skydeck Marketplace, in 2011. The building utilized a revolutionary frame system known as Bundled Tube engineered by the great Fazlur Khan, which is still used by super towers today to climb to greater and greater heights. United Airlines moved their headquarters into 20 floors of the building in 2013 and another name change is not out of the question. Featured in The Dark Knight and Ferris Bueller's Day Off, it most recently appeared in the film Jupiter Ascending starring Channing Tatum & Mila Kunis.