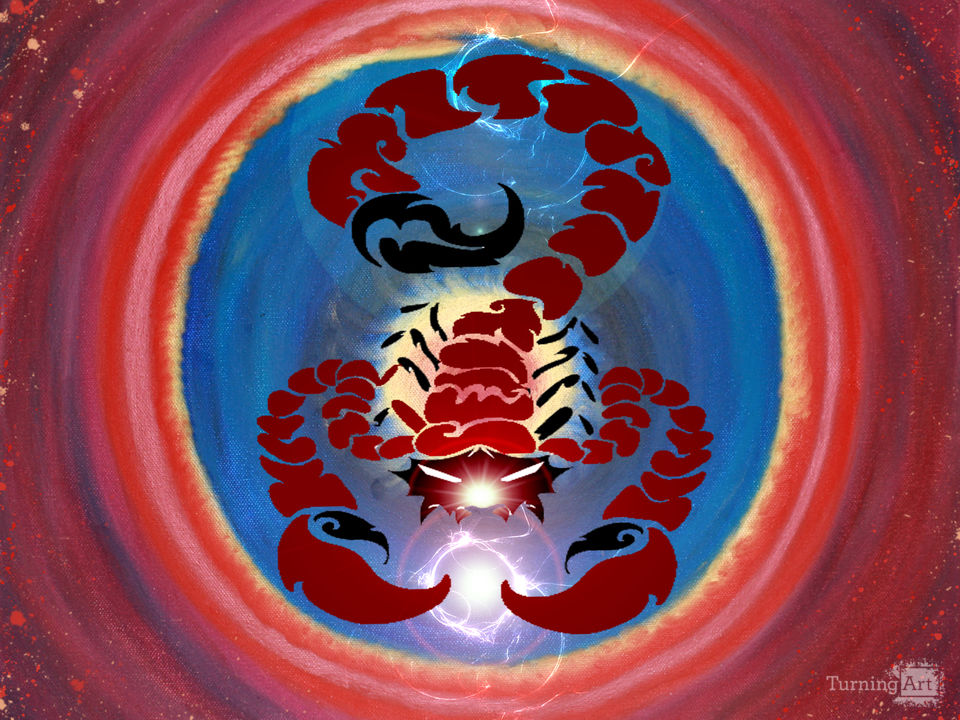 Scorpio is the eighth Sign of the Zodiac, and you shouldn't take that lightly. You shouldn't take Scorpios lightly, either. Those born under this Sign are dead serious in their mission to learn about others. There's no fluff or chatter for Scorpios, either: these folks will zero in on the essential questions, gleaning the secrets that lie within. Scorpios concern themselves with beginnings and endings, and are unafraid of either; they also travel in a world which is black and white and has little use for gray. The curiosity of Scorpios is immeasurable, which may be why they are such adept investigators. These folks love to probe and know how to get to the bottom of things. The fact that they have a keen sense of intuition certainly helps. It's the Scorpion which symbolizes Scorpios, and it's no accident. Much like the Scorpion would rather kill itself than be killed, those born under this Sign are the ones who are in ultimate control of their destiny. It is life on the Scorpion's terms, too, since these folks promote their agenda (they are quite the executives) and see to it that things go forward.

Others may find this overbearing (it can be) and even self-destructive, but that's the beauty of the Scorpion: these folks have tremendous regenerative powers, much like the literal Scorpion can lose its tail and promptly grow a new one. Fearless Scorpions rarely lose, per se, they just keep on going, since they are stubborn and determined to succeed (this Scorpio trait is in keeping with the Fixed Quality assigned to this Sign). Scorpios work as hard as they do so they can someday sit back and feel satisfied with themselves. These folks are intense, passionate and filled with desire. They're also complex and secretive, so don't expect to get much out of them, lest they become suspicious and exit stage left. It's best not to bet against Scorpios, either, since these folks are surprisingly resourceful. Scorpio is ruled by the Planets Mars and Pluto. Mars was the God of War in ancient Roman mythology and is the first (and most ancient) ruler of Scorpio. When Pluto was discovered in the 20th century, it was also assigned to this Sign. Pluto was known as the God of the Underworld in ancient Roman times, so when coupled with Mars, expect some intense energy to head toward Scorpions here on Earth. This planetary combo makes for people who are motivated, penetrating and aware. Scorpions don't miss much, since they are highly attuned to the vibrations of others. They are intuitive, probing and very focused on knowing who's who and what's what. Scorpions can lose their temper (and even become vengeful) when someone gets in their way, so it's best to give them plenty of room.

Remember, they're unafraid, and a loss today simply means an opportunity for victory tomorrow. The Element associated with Scorpio is Water. As opposed to the 'roiling seas' seen in other Water Signs, a better motto for Scorpions would be 'still waters run deep.' Those born under this Sign are as emotional as their waterborne brethren, it's just that they're not as likely to show it. The Scorpio's emotions are repressed, kept under cover. Again, secrets to be used another day. That said, be aware that these folks are clever, perceptive and always in the mix. Their ability to see into things can sometimes be a curse for Scorpions, however, since they can take an insignificant matter and turn it into a huge slight. Beware the Scorpion who feels crossed! These folks can turn vindictive in no time flat. Luckily, once Scorpions catch their breath, they will return to their usual determined and loyal (albeit strong-willed) ways. Finally, while Scorpions aren't above some subtle manipulation to get what they want, they'd much rather take a scientific, even mystical path. The Scorpio-born are powerful and passionate, qualities which serve them well, as long as they don't let them deteriorate into self-indulgence or compulsion. Scorpios love competition in both work and play, which is why they'll air it out in sports and games. Extreme sports are right up the Scorpion's alley, as is most anything which will test their mettle. They've got to have an adversary, since it makes the game that much more fun. The Scorpion's colors? Powerful red and serious black. When it comes to love, though, Scorpions soften up a bit and are caring and devoted with their lovers, even if they do hold on a bit tight. Scorpions are also lusty in the extreme (how else?), so they need to be mindful of their reproductive organs. The great strength of the Scorpio-born is in their determination, passion and motivation. Scorpions don't know the word quit, which is why they usually get the job done. A powerhouse? Like no other.