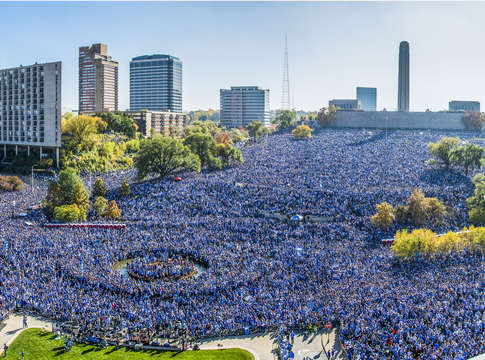 This image was created at the Kansas City Royals 2015 World Series victory parade and rally November 3, 2015. Shot from the roof of Union Station Kansas City
I photographed the restoration of Union Station beginning in 1994 and finished that phase of my volunteer documentation of America’s second-largest train station in 1999. I have continued to shoot all aspects of the old depot as part of my volunteer contribution. My book Kansas City's Union Station: Reflections after 100 years was published in 2014.

From my long association with the station I can usually access any part of it, including the roof.

This particular day, November 3, 2015, photography was a bit more difficult because the pyrotechnic guys were set up to shoot off fireworks from the roof. The fire marshal was there as well. With the help of some great Union Station people we were able to convince him to give us five minutes to shoot if we promised to be off the roof before the fireworks began.

The rampart around the roof is about 12’ high, so a ladder was required to reach over the top. The only ladder that we could access in the allotted time was 8’. So in order to reach the top of the wall, we had to prop the bottom end against the A/C unit box and the top end against the rampart. My assistant, brother George Inman, stood on the bottom rung to stabilize it as I crawled up it and onto the ledge. As I pulled myself up and looked over the side at the literal sea of humanity, my jaw dropped and I am sure my eyes flew wide open. I may have uttered a profound profanity of discovery☺ By the time we got the ladder in position, I made my way to the top, and clutched my camera with my free hand, I only had time to made eight exposures. From those eight I picked four to stitch together to create the panoramic image. So the photograph was made under considerable pressure, both logistically and psychologically :)