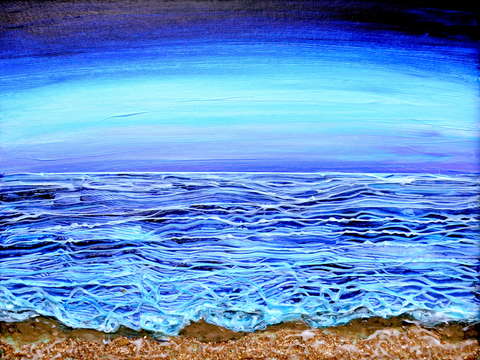 Acrylic on canvas with glass, mica and extruded acrylic details. Ribbons of water depicts a seascape at dusk. I have always admired the special quality of the evening skylight.

It was created in stages. First a uniform light blue background was laid in. The horizon was masked and the sky was painted in, working wet into wet and blending (quickly!). The tape masking the horizon was moved up to mask the lower part of the painted sky.

The water was created in stages. An acrylic heavy gel medium tinted deep blue was raked into the background to create indigo raised wave patterns, revealing the light blue background between the raised raked waves. When this layer was dry a second layer of tinted indigo was raked in at slightly different angles. This creates a moire pattern of dark and light blue, very much like the patterns of waves on the surface of water. Since the indigo layers are raised and have some transparency, the paint film creates a nice three dimensional rippled effect.

When the raked gel moire was dry, Closely spaced three dimensional ribbons (ridges) were added in wavy lines using tinted acrylic gel medium extruded through a pastry bag. These stand out from the canvas and come to a point, rather like opened louvers in blinds. The three dimensional “louver” texture creates changing patterns and moires with the background as the piece is viewed from different angles. The ridges curve into a tangle where the waves break on the shore.

A layer of mica structures the shoreline. Tinted sand in a soft gel medium was used to paint in the areas of the shore that had been wet by waves. Liquid acrylic medium was swirled with light and transparent aqua paint (swirled, not completely mixed). This liquid was poured into the breaking wave ribbons and in curved patterns along the shoreline to create the color patterns of seafoam. Golden glass bead gel was then added to create subtle foaming textures in the breaking waves.