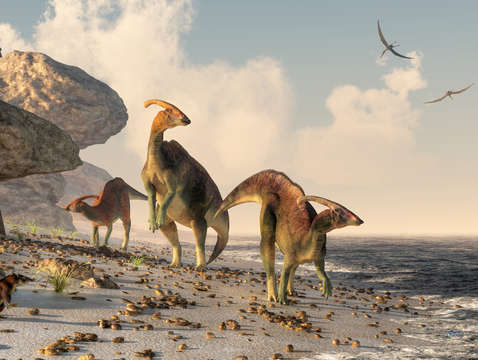 Three parasaurolophus stand on a rock beach just after a wave receded. While one roots around between the small stones, two others look out to sea as if they just hears something. In the foreground a small mammal watched the three dinosaurs from behind a rock. In the distance, a pair of pteranodons fly in the sky.

I started this image with the idea of creating a scene of large rocks lining a coast. I like the way it looked, but it lacked a subject, so I decided it would be perfect for some dinosaurs be there, though rather than ferocious carnivores, I decided on something a bit more peaceful to match the mood of the environment.