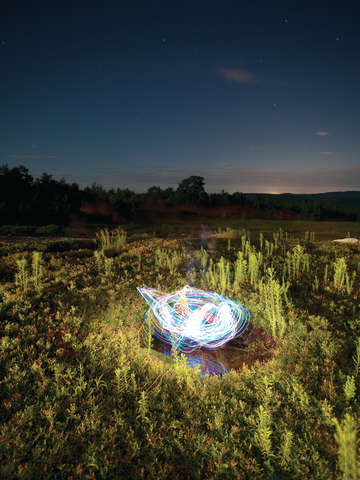 Nature at night is something which can strike fear into the heart of many people. The unknown, the mystery, treading where others would not, is a task often left to artists or other somewhat neglected segments of humanity. Rarely would I encounter other humans in my wanderings at night, but when such an experience occurred, I was often left to explain my actions in a way that sounded the least insane. What person in their right mind would be out here in the dead of night, swinging lights around in front of a camera? A few times, I believe I have truly frightened some people who, upon seeing glimpses of my work from afar, were convinced of their extraterrestrial origins. No matter, for these works are indeed an attempt at accessing otherworldly states of being.