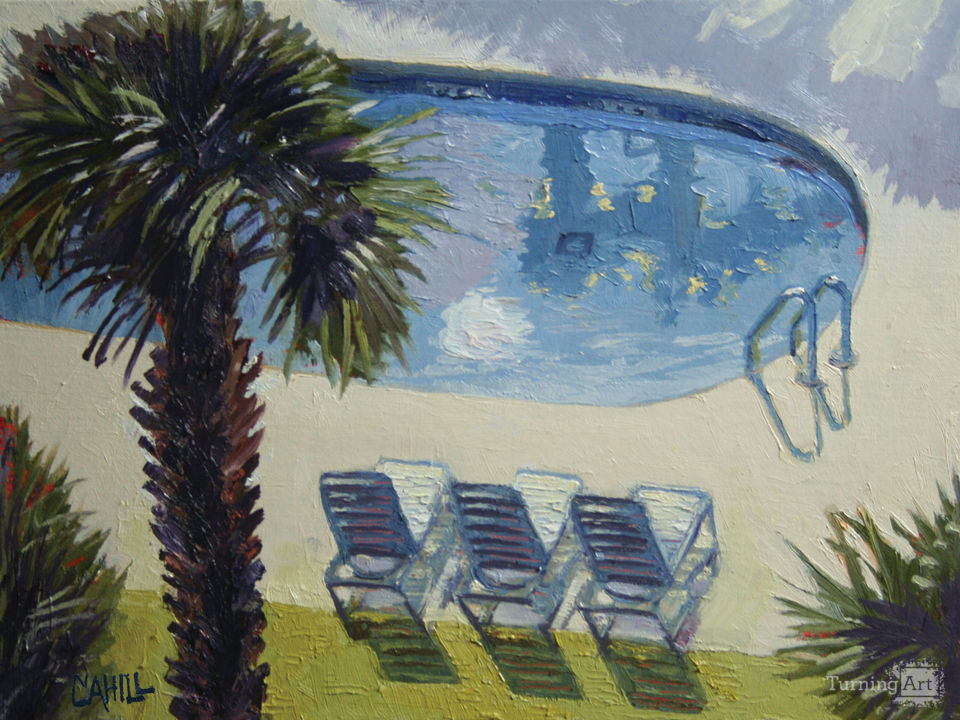 Painted plein air from a condo balcony on Isle of Palms South Carolina.

Other works by Ed Cahill

Ed Cahill's interest and inspiration swings from wondrous landscape and quiet woodland streams, to whirling moonlight evenings on crowded expressways. Born in Wisconsin, he was raised in Ohio and encouraged by his artistic mother at an early age. Ed taught himself to paint first with tempera, then acrylic and finally oil. After a formal B.F.A. education at Carnegie-Mellon in Pittsburgh he entered into a commercial art career in graphics and art direction. Ed now owns and operates his own ad agency near Atlanta.

Inspiration and preparation are entwined in much of Ed's art. Most of his landscapes start with a "plein-air":http://en.wikipedia.org/wiki/Plein_air painting and progress through sketches and intense planning into something more. Ed describes it as a need to express the wonder that he feels. What is hard is filtering out the unimportant things to eventually come up with the intended feeling. Most would call his work realistic, but he brands it romantic. He doesn’t try to duplicate nature exactly, rather he accepts the limitations of the human hand and eye skill and appreciates the joy and angst it reveals. The work is mostly about sensation, standing at the edge of the woods and looking out over a beautiful sunlit valley or sitting on the beach and smelling the sea while beautiful clouds build in the air and a shrimp boat passes by trailing a flock of gulls. It’s the feeling that’s important to Ed and occasionally he's lucky enough to get it right.