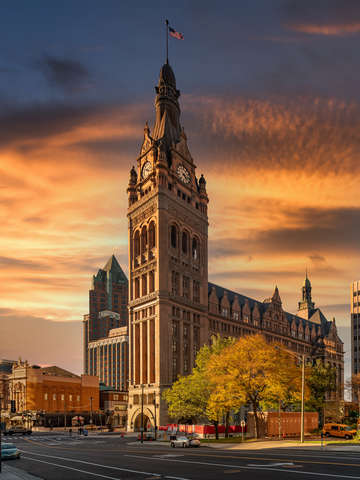 Milwaukee City Hall was designed by architect Henry C. Koch in the Flemish Renaissance Revival style, based on both German precedent (for example, the Hamburg Rathaus or city hall), and local examples (the Pabst Building, demolished in 1981). Due to Milwaukee's historic German immigrant population, many of the surrounding buildings mirror this design. The foundation consists of 2,584 white pine piles that were driven into the marshy land surrounding the Milwaukee River. From that base, the main block of the building rises eight stories, with the massive tower at the end rising to 350 feet, with its clock faces flanked by four "beer stein" turrets, and topped by a copper-clad spire. The upper part of the tower was rebuilt after a fire in October 1929.