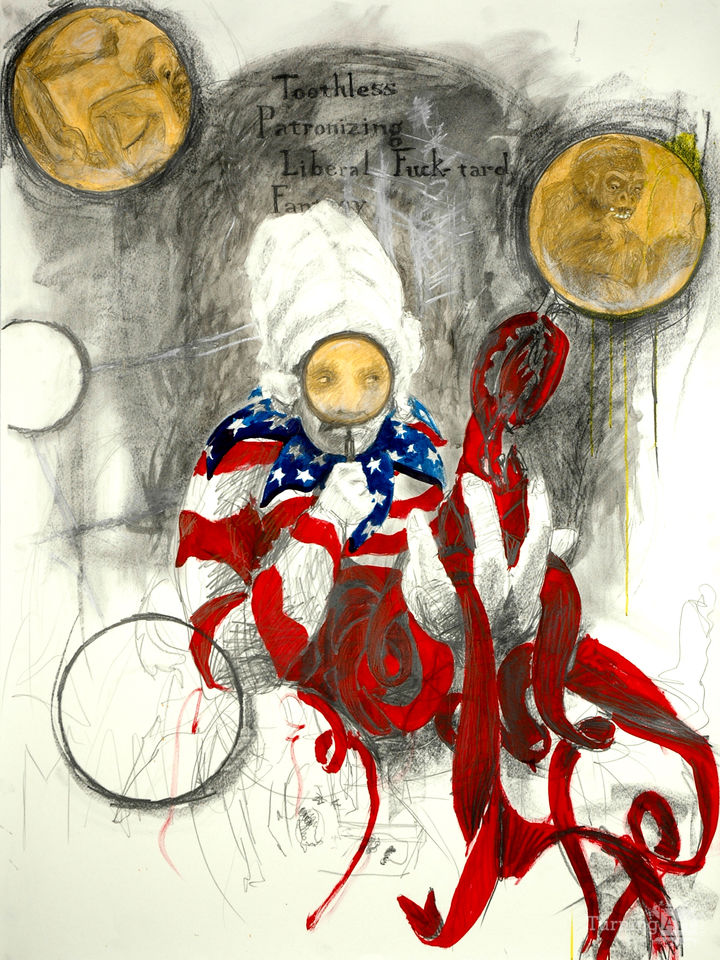 Man of The Year: The Movie, The Drawing

Colored ink and graphite on archival cotton rag paper. This piece is my re-imagining of the 2008 Robin Williams vehicle "Man of The Year" as a drawing. I have not seen the movie, but the film's existing posters at the time were literally so hideous they made me angry. Upon watching previews of the film, I decided to mock it in a poster of my own.

Other works by Joshua Pelletier

Joshua Pelletier was born in upstate New York in 1976, but spent the bulk of his formative years in Maine. He eventually returned to New York and earned a B.A. from Bard College. After college he decided to escape the cold and darkness of the east coast winters by heading out to California to get his M.F.A. from UC Davis. Life being the unpredictable thing that it is, he now finds himself living back in New York.

He has this to say about himself and his art: "It’s okay to laugh at these images. To me, drawing is like a game. I push the image, the image pushes back. Something emerges- an interesting turn of shadow or perhaps a stray line which reads like a familiar contour. Whatever it is in that soupy marsh of marks and tangled lines, it gives me ideas. Once the idea comes the chase is on. I work to the very limits of my memory and patience for detail, re-tracing the lineaments of the form. The drawing starts to get a bit of life to it. It keeps me working. We joke around- it’s a lot like play. Unstructured and wild, but also fragile somehow- unsustainable. Perhaps the drawing pulls a sad or serious idea out of me, and we explore this dangerous terrain together. But the key, always, is having that mental buoyancy, that quickness and ease of focus that comes with a game."