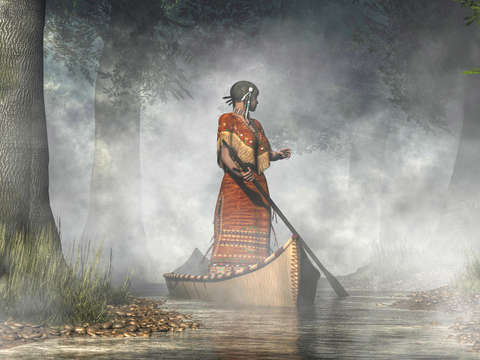 Maid of the Mist

An American Indian woman stands in a canoe and turns to look nervously back as if someone may be following her. She holds the a paddle in her hand as she peers back into the forest through which the creek she travels on runs its course. A dense fog enshrouds the forest, mists that obscure the world around her.

This image is based on the Native American legend of Lelawala, the Maid of the Mists. In the Iroquois story, Lelawala is forced to marry a king that she does not like. Rather, she is in love with the Thunder God He-No who lives in a cave behind the Horseshoe falls (part of Niagara Falls). She escapes her husband and paddles away on a canoe and over the falls where He-Na catches her so that their spirits could live together beneath the falls.

I've taken a bit of artistic license and depicted her travelling down a small creek. The Niagara river is actually quite wide. However, I wanted something more in the composition other than just water and sky. Perhaps this is the beginning of her escape and she is starting on a small tributary of the river.

While I based this on the story of Lela Wala, I actually was inspired to make this after watching the movie "Mr. Turner" about the famed English painter J.M.W. Turner. I liked the way he combined light with fog and atmosphere. It made me want to create an image where the atmosphere dominated the scene.

I made this artwork using digital rendering (CGI) techniques as well as digital painting techniques.