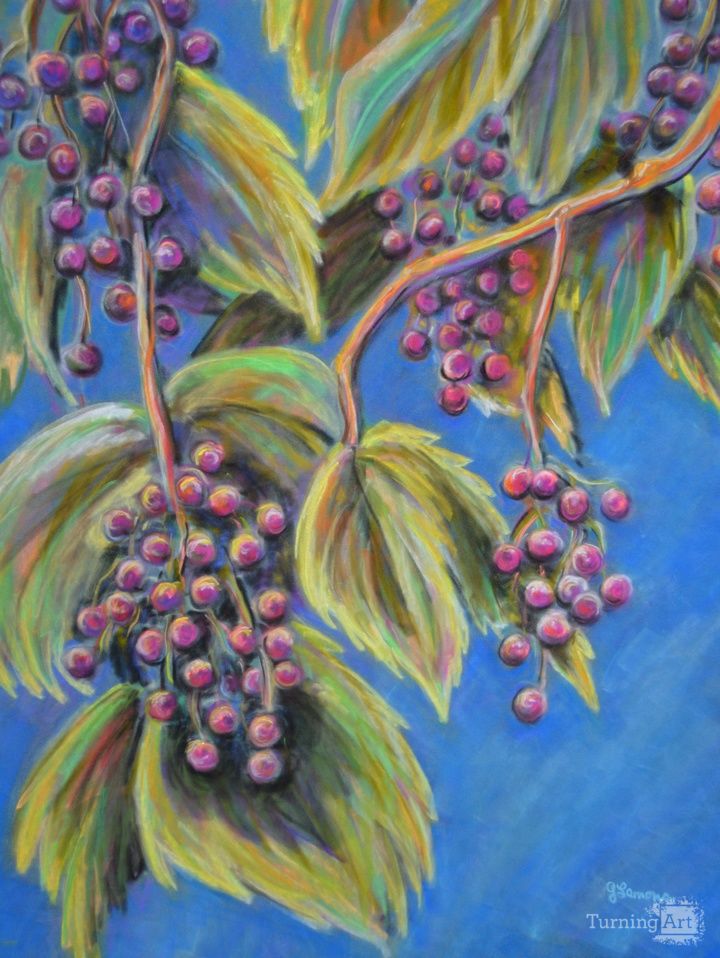 Pastel painting. Inspiration from God today for this painting comes from two verses. Matt. 9:37-38 "…the harvest is plentiful, yet the laborers are few." And John 1:5 "I am the vine, ye are the branches." I am thankful to The Lord as He guides me. Grapes are also naturally good source of vitamins.

Other works by Julie Lemons

Julie Lemons uses soft pastels and watercolors to create paintings of animals, people, floral, and several other subjects. Her mother influenced her art from the age of three, and Julie has very early memories of learning about the background, middle ground and foreground. Now an accomplished graphic designer, she has worked for Lincoln Public Schools for almost 19 years and freelanced for 30 years. Julie moved to Krum, Texas to live closer to her daughter after retiring as a graphic designer from Lincoln Public Schools in 2016. She is a certified Grumbacher Instructor.

New art additions to TurningArt include landscapes and floral paintings. A series of 14 soft pastel landscape paintings were shown at the Nebraska Governor's Residence. Two of her pieces hang in offices at the Nebraska State Capitol, in the collections of a federal judge and the Director of Agriculture for the State of Nebraska.

As a past president of the "Association of Nebraska Art Clubs", Julie led forty-three art clubs across the state and helped to organize the yearly state-wide art conferences. She hosted an art exhibition for mothers of the state, inviting artists to participate in 2013 and twice coordinated an all-city art show for high school students in Lincoln, Nebraska. Helping other artists enriches Julie’s life and her artwork, thus feeding her passion.

Julie has published her first book, "Naturally Wild: How to paint animals using pastels." She hopes to do art demonstrations and book signings at the zoos represented in her book. She also has illustrations in three other books. Julie fully illustrated the book, "Dolly the Dolphin with Wings, " by Viola Echols.