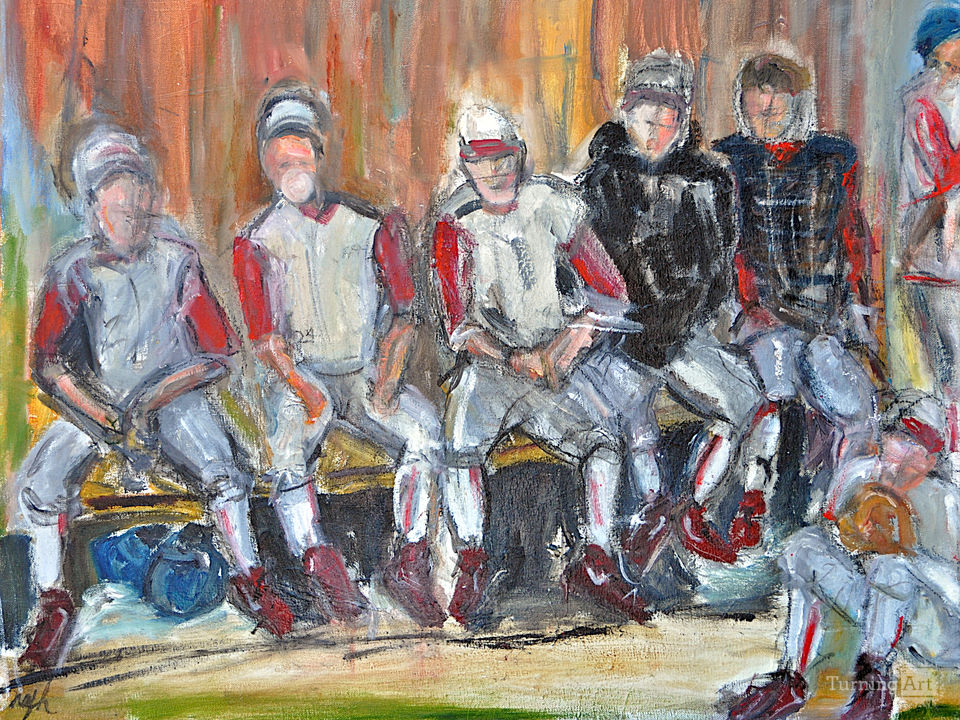 Young Boys in the Dug Out waiting to play, a typical Saturday, great for a children's room.

“Boredom is foreign to Halbert’s paintings-variation, not repetition, is her rule in dealing with the figure. Several of her finest subjects achieve an independent complexity in their rugged, hearty dignity.”
Victoria Donohoe, The Philadelphia Inquirer, 4/22/11 MUSE Gallery,
Philadelphia, PA

Nancy E. F. Halbert, a former dancer and choreographer, has a Masters in Art Education from the University of the Arts with a prior MFA in Dance from Temple University, Philadelphia, PA. In 2013, she received a fellowship to attend Vermont Studio Center, an artist residency monthly program in Johnson Vermont and was also juried as a featured artist in Studio Visit Magazine, January edition. www.studiovisitmagazine.com pages, 68 & 69.

In, 2014, she was accepted into The Philadelphia Sketch Club and she received the Award for Best In Abstraction in the Small Oil Show. She has been accepted into several shows at the Sketch Club and the exceptional portrait painter, Nelson Shanks, juried one of them. She is also a Professional Artist Member of the Main Line Art Center, Haverford, Pennsylvania. Nancy served as the Volunteer Director and the Membership Coordinator for three years at the MUSE Gallery in Philadelphia, the oldest artist cooperative in the city. She was a member from 2007 to 2013 and had three solo shows and participated in seven group shows. Her paintings were purchased in all shows.

Her contemporary figurative and landscape paintings have been juried to exhibit in such prominent shows as The Woodmere Art Museum's Contemporary Art Show, 2009 and 2012 in Philadelphia. The jurors were international known artists Sam Gilliam and Alex Kanesvky. She has shown at Goggleworks in Reading, PA, the Betsy Meyer Memorial Show at the Main Line Art Center, Haverford, PA; The Hospital of University of Pennsylvania’s Celebration of Life Show in 2013 and 2015; James Oliver Gallery, Art/nude Philly, 2013, a benefit for the Abramson Cancer Center. Recently, her work has shown at Lucky Gallery in Key West, Florida. Her paintings are in public and private collections in Australia and the United States, including, New York Presbyterian Hospital.
She has completed several commissions in landscape and the figure, hired to paint in her own expressive and abstract style, while meeting the client needs.

Nancy has been an art teacher in continuing education programs in the area for over fifteen years. She has taught painting and drawing in pastels, watercolor, oils, acrylics and art history to adults and children of all levels. She is devoted to empowering others to create art in their own unique style while gaining the necessary skills to develop unified compositions in a supportive environment. She also teaches lessons in her home studio in Havertown, Pennsylvania.

“The Dancing Canvas”, a three minute professional video of her painting in her studio and discussing her inspirations may be watched at http://www.youtube.com/watch?v=uRJTu7YWye0.