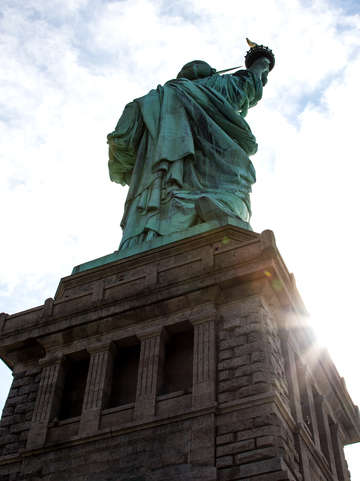 The colossal neoclassical sculpture is of a robed female figure representing Libertas, the Roman goddess, who bears a torch and a tabula ansata (a tablet evoking the law) upon which is inscribed the date of the American Declaration of Independence, July 4, 1776. A broken chain lies at her feet. The statue is an icon of freedom and of the United States, and was a welcoming sight to immigrants arriving from abroad.

After the September 11 attacks in 2001, it was closed for reasons of safety and security; the pedestal reopened in 2004 and the statue in 2009, with limits on the number of visitors allowed to ascend to the crown. The statue, including the pedestal and base, was closed for a year until October 28, 2012, so that a secondary staircase and other safety features could be installed; Liberty Island remained open. However, one day after the reopening, Liberty Island closed due to the effects of Hurricane Sandy in New York; the statue and island opened again on July 4, 2013. Public access to the balcony surrounding the torch has been barred for safety reasons since 1916.