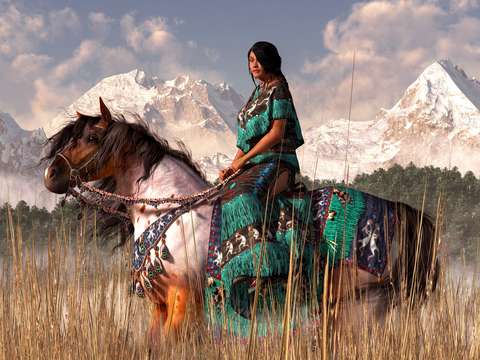 An American Indian woman rides a dun and white spotted mustang horse through a field of tall grass. Off in the distance a forest of fir trees lines the grassland. Behind the forest, sharp, rocky, snow covered peaks rise high into the sky where wispy pink clouds drift lazily by. A gentle wind blows picking up the horse's black mane and tail. Her saddle and garb are both black with turquoise fringes. The repetitive symbol of Kokopelli, the fertility spirit, fill the open spaces of the material.

Kokopelli is a fertility deity from American Indian cultures of the Southwest. It is theorised that he is based upon a real type of person, a kind of travelling merchant, storyteller, reporter, and entertainer. You might say he is the Native American equivalent to a European bard,troubadour, or minstrel. Generally, he is depicted alone, but in some renditions, he has a
consort or wife known as Kokopelmana or Kokopelli-mana. Here I have depicted her as a real person, a travelling story teller riding a horse through the American Wild West.