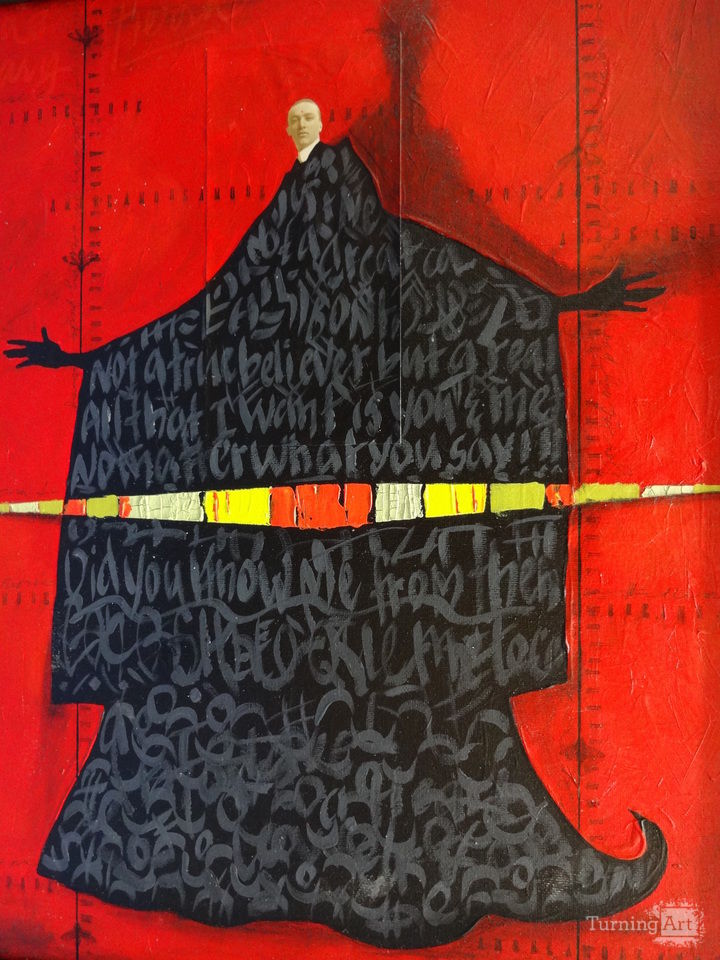 Infinite Queen of Masculinity, from the Protest Proposal Series 2013

From the Protest Proposal Series; this piece started a generation of newer works that gear more towards a darker side of me. This and the other pieces in the series represent the pictorial rebellion of the artist against strictness and repression. To see more of the Protest Proposal series, please visit acevedostudio.com.

Other works by David Acevedo

David Acevedo's interest in art came at the tender age of four, when he would sit for hours analyzing, page by page, an old illustrated bible that he found in a closet. After that, drawing and coloring became an obsession. Eventually David discovered the world of comic books, and for years he practiced copying the shapes of the heros' bodies and analyzing the details and colors in the drawings. He developed a keen eye for proportion and color.

At seventeen years of age, he decided to forge his parents' signatures on a college application and was consequently accepted to the Visual Arts Program of the University of Puerto Rico in the city of Mayagüez. There was a reason why his parents disapproved of his decision: money. Moving to Mayagüez meant finding a place to live, money for college, books, meals etc. For David, being accepted to such prestigious university was too big of an opportunity to miss. Luckily, a Pell Grant, among other financial aid, helped him overcome his financial hurdles and get his formal art education underway. He graduated cum laude in 1998.

Since then, several major things happened to advance his art career. He moved to San Juan, Puerto Rico a year or so after graduation, found representation in a couple of galleries, and started producing his unique pieces in a small studio/custom frame shop he shared with his partner Xavier Brignoni. In 2000, David was offered a job in Fort Myers, FL. It was a great opportunity and a chance to secure a future. After much consideration, he decided to leave his partner and the beloved island he had come to call home. After moving, he struggled. But again, luck struck; Xavier moved to Fort Myers, and they both began a new life on the main land.

David has built a reputation for himself as artist, winning Visual Artist of the Year at the Lee County's Angel of the Arts Awards in 2009. He is focused on his promising future and will keep working on different projects and proposals to help the local art scene grow to its maximum potential.