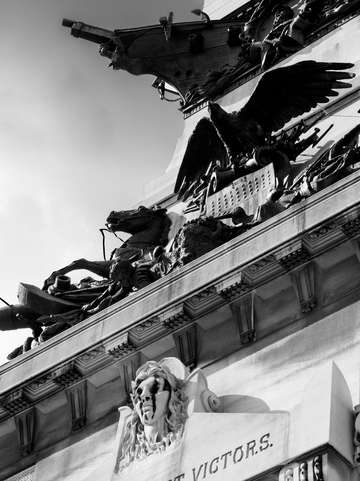 The Indiana State Soldiers and Sailors Monument is a Neoclassical monument built as the centerpiece to the landmark Monument Circle in the heart of the Capitol District in Downtown Indianapolis. Designed by German architect Bruno Schmitz and completed in 1902, it is not only a tribute to those who fought during the American Civil War, but also features elements depicting the American Revolutionary War, the War of 1812, the Mexican-American War and the Spanish-American War.

The first bronze astragal seen here, created by Nikolaus Geiger from Berlin, is a scene from the battlefield featuring the U.S. Army and it sits 70 feet above the base of the monument. The second astragal, created by American sculptor George Brewster from Cleveland, sits 12 feet above the first and represents the U.S. Navy.