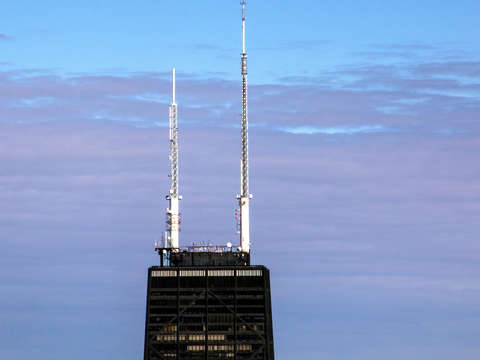 The John Hancock Center is one of the most iconic & instantly recognizable buildings in the world and is situated in Chicago's famed Gold Coast neighborhood bordering the Magnificent Mile (Michigan Avenue) and Streeterville. Designed by Bruce Graham (architect) & Fazlur Kahn (engineer), it was completed in 1969 and became the tallest building in Chicago, the second tallest building in the world, the highest residence in the world, and the first tower to be over 1,000 ft outside of NYC. The design team went on to complete the Sears Tower five years later, and the Hancock is now the city's fourth tallest building. The observation level was revitalized and became known as 360 Chicago in recent years, which also introduced a new attraction called Tilt! where observers can "tilt" out over Michigan Avenue face first in a mechanized viewing window. The building has had famous residents including Jerry Springer & David Schwimmer, and this is where Chris Farley passed away in his apartment on the 60th floor. Although featured in numerous movies and TV shows, it is probably most recognized from Poltergeist 3.