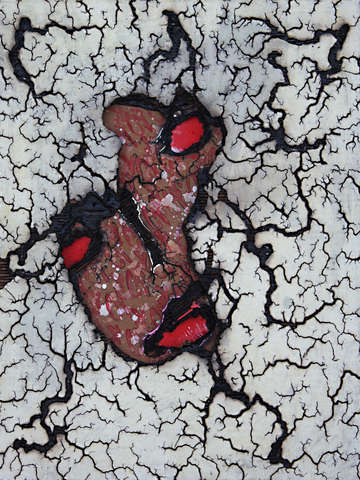 This is the last piece of an abstract series I did in 2011. It is composed of three separate layers, fused together with contact cement. The top layer, covered in black fractal patterns which have been burnt into the cardboard using high-voltage electricity, makes it appear that the center image is pushing outwards.

The second layer is covered in a repeating stamp pattern, which reads "Girl", warped and upside down. This is supposed to serve as a metaphor for the process of stamping/labeling to imply meaning. The illusion that the central image is emerging from the piece is symbolic of the meaning that is being imbued into the piece as it is being viewed.