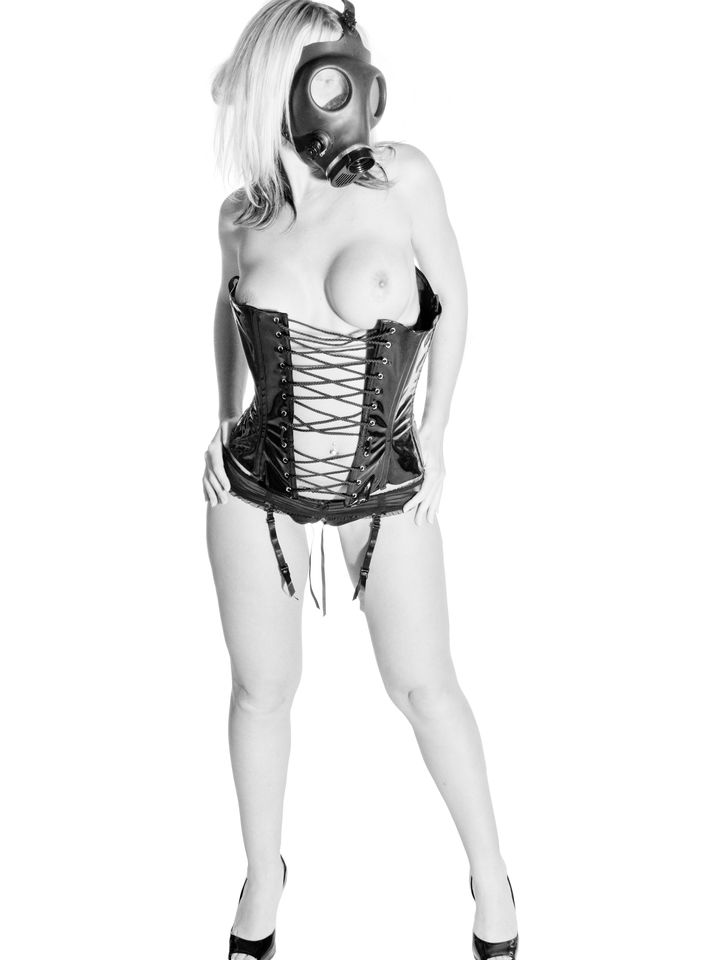 “Fallout Seduction” is a black and white artistic nude photograph that was taken in a studio setting with controlled lighting. The model stands boldly in the center of the silvery white backdrop, black leather heels planted firmly on the floor. Her hips jut to the viewers’ left with her hands holding them in place. A black latex corset has been opened to show her breasts over the loosened strings. Her shoulders are pulled back, and her head is saucily turned to the side, face covered by a gas mask indicating dire circumstances.

Other works by Jeremy Byers

Jeremy Byers is a photographer, artist, and technologist living in Ball Ground, GA. He ran an art gallery in Jasper, GA, from 2011 through 2012, where he displayed and promoted art in the North Georgia region. His work has been displayed and sold in various local art galleries since 2007, including Ball Ground Art Gallery, Wild Cat on a Wing in Ball Ground, Fringe in Canton, and Ann Art Gallery in Canton. He also was requested to participate in a major art event in Atlanta, called Raw, in 2012. He was the first photographer asked to participate in this event. As Jeremy started moving into online art sales, he spanned beyond Georgia into other states within the US, then beyond the US to international sales. He utilized various forums for art sales, eBay, Art.com, Etsy, and his own website: buyfineartphotography.com. Most recently, he has sold art to collectors in the UK, France, Sweden, Singapore, Japan, Brazil, and other countries.

Jeremy’s motivation for his art is trying to truly capture the beauty in all things. He tries to express attachments both emotional and spiritual in what he sees into a form that all can relate to. He digitally manipulates some of his art to reflect deeper meaning through various methods and approaches, for example by digitally aging and/or over-exposing photos. His work is an eclectic mix of nature, still life, and emotive human shots through the art medium of photography. His true passion is doing nature photography throughout all seasons of the year, as well as nude figure studies.

Jeremy’s first foray into art included doodling with fountain pens. When he was a teenager, he began using acrylics and oil paints. He then decided to move on to spray paint and graffiti. By age seventeen, he started working with computer-based graphical editing, illustrating, and photo-manipulation. He fell in love with doing this type of work, including 3-D modeling. That transitioned into taking photographs and manipulating them using Photoshop. Oil paint is his favorite traditional art medium currently, because of the complexity of his designs and time he can spend on creating his paintings. Normally, he spends three months to a year or more on one single painting. During this time, he can keep adding and adding to it.

Dreams and nightmares inspire a lot of the photographic projects Jeremy has done. A lot of the images or photographs are inspired by spring and seasonal passion for botanical studies. Life in general is inspiring to him. Thoughts and emotions are transported and relayed into those images. When it comes to photography, he plans out what he wants to portray, and then he spends hours getting his lighting and focused correct with a fraction of a second to capture the image.

Jeremy believes beauty encompasses art by conveying emotions or memories. It could be related to a landscape that makes the viewer want to be there, or it could be a macabre image capturing the injustices in the world or society. As far as beauty goes, it is not just upbeat art, but the whole spectrum of art, that is beautiful. One thing that Jeremy has personally noticed is that people are drawn to pretty floral and landscape images, which includes the female body as a landscape. He believes that a lot of the other art that relays war imagery and protest images are being cast aside as just journalistic imagery and discarded, despite the fact that they have a story to tell. Some of those images wouldn’t necessarily be considered beautiful, but are very thought-provoking. The future of Jeremy’s art will continue to grow and bring beauty and inspiration to all who view it.
In his artwork, Jeremy is motivated to capture the beauty in all things; he tries to express attachments both emotional and spiritual in what he sees into a form that all people can relate to. In an effort to do so, Jeremy digitally manipulates some of his art to reflect deeper meaning through various methods and approaches, such as digitally aging and overexposing photos.

His work is an eclectic mix of nature, still life, and emotive human shots through the art medium of photography. However, oil paint is currently his favorite traditional medium because of the complexity of his designs and time he can spend on creating his paintings.