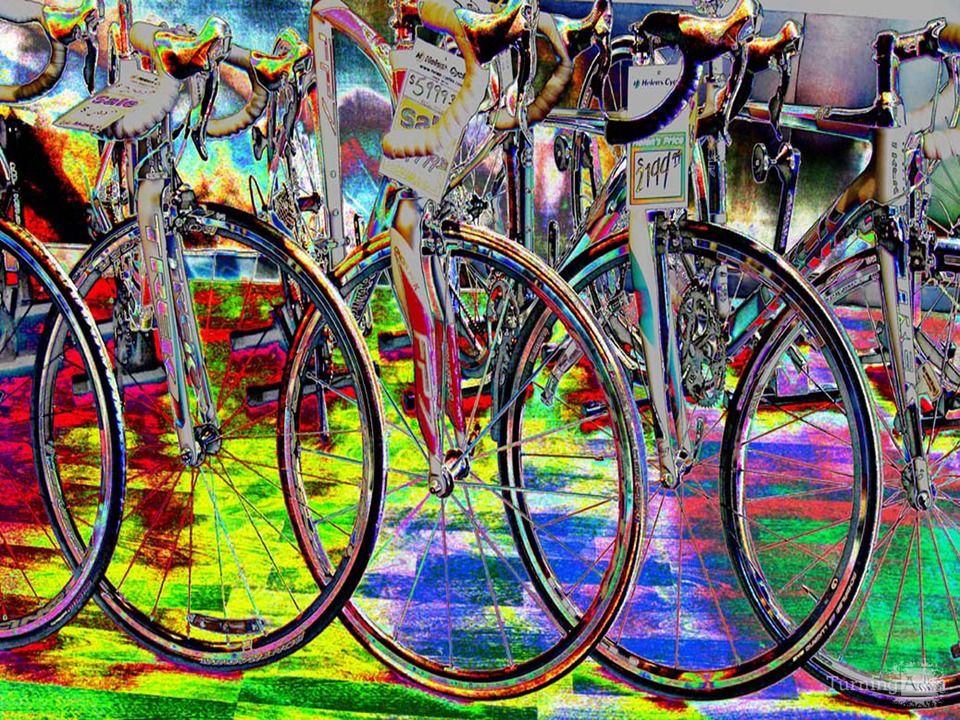 While wondering around Marina del Rey I ventured into an expensive bicycle shop and this shot just seemed like it was waiting for me. The bikes are really amazing and after playing with the shot in Photoshop I got this result.

Other works by George Marlowe

Self-taught artist George Marlowe feels the drive to create art on a daily basis. Whether it is clay, acrylic work on paper, collage, assemblage, photography, or wood sculpture, the art-making process is essential to his daily life.

George comes from a creative family. His father was a band leader, his brother was a piano player and arranger and his mother taught ceramics, music and dance. Not surprisingly, art has been central to his life, both professionally and personally, since childhood.

Hardly a day goes by when he doesn’t feel the need to create. Some days it’s a clay masque, on others, it’s an acrylic work on paper, on others it’s doing a resin casting or creating a collage or an assemblage. When he leaves the house he nearly always takes his camera with him, keeping his eye out for something that might turn into something special… even if that something is nothing more than a fence post behind a house. For George it's all about the process and the work.

Most “real world” jobs don’t provide artists with opportunities to express their creativity. So he counts himself as lucky; his business/artistic career began in the 1970's and included developing art and craft products for Mattel, Ceramichrome and the art and craft division of General Mills. At Ceramichrome, George had the honor of working with some of the finest and most highly regarded ceramists in the world, it was a priceless education.

George was re-introduced to ceramics in the late 1980’s. A friend, who was taking a ceramics class at a local recreation center, suggested he join her; “it would be fun… and you could use some fun!” It was there he created his first two masques and knew that he had found his calling.

In 2009 George returned to another one of his early loves, photography. Most of his photographs depict things we walk past, see and take for granted every day but when photographed the right way reveal themselves to be surprisingly artful. In some instances, he digitally manipulate the photos to create work that emulates the colorful and whimsical nature of his ceramic masques. In recent years George also created a series of abstract acrylic works on watercolor paper that he calls “Patterns.” (First worked in that medium in the early 1960’s, but much of what he then created was lost in the Montecito, California fire of 1979.) More recently, George embarked on another art form that excited him, collage. George was inspired by the work of Trinidad artist Robert Mackie, who has personally played a significant role in expanding George's artistic horizons in collage, assemblage and cloisonne. George has created collages and assemblages with paper, corrugated, metal, wood, leather and veneer. He is also very excited by one of his latest interests, cloisonne and has created initial pieces in that medium.

As you’ve probably figured out by now, George has never stopped looking for new and exciting ways to express his creativity. He recently began to work on a series of large wood-knot sculptures that are currently being exhibited at the Shannon Colburn Gallery on Robertson Boulevard in Beverly Hills, California.