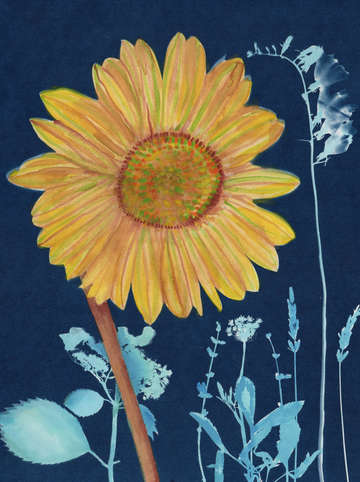 In the summer of 2015, Julia Whitney Barnes moved from Brooklyn to a hundred-year-old house in Hudson Valley, along with her photographer husband. Four weeks later, she gave birth to their daughter, Magnolia. Instead of a baptism for the baby, the couple organized a tree planting ceremony and positioned a magnolia tree in their front yard, including the placenta as fertilizer. This small act was the beginning of the artist’s intimate connection to plants growing in her yard. After the birth of their son August in 2018, the couple had a similar ceremony with a dogwood tree in their back yard.

Throughout the eighteen years Whitney Barnes lived in New York City, one of the things she felt most lacking was a direct relationship with nature. After moving to Poughkeepsie, the influence of having green space of her own for the first time in her adult life started to creep into her studio process. The simple action of frequently going outside, then inside, then outside again made Whitney Barnes think about interior/exterior in formal and metaphorical ways.

In this series, Whitney Barnes approaches each growing thing with equal importance regardless of whether it is a weed, rare species, wildflower, or cultivated flower. Most works have several species fused into one composition, often to the point where the exact plants depicted are open to interpretation.