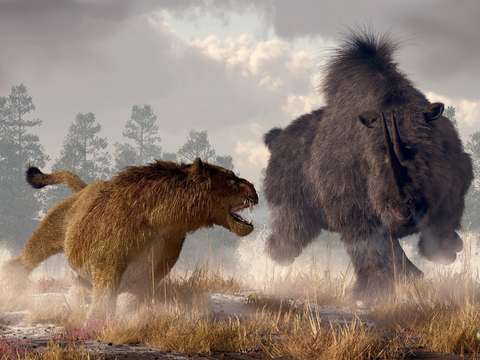 Clash of the Ice Age Beasts

Two of the most fearsome creatures of ice age Europe are having it out. A rogue male cave lion (panthera leo spelaea) has wandered too close to a grazing woolly rhino (coelodonta antiquitatis). Much like what happens when the modern rhinoceros and lion cross paths, a confrontation occurs. Kicking up snow and rocks, the rhino charges the lion while the great cat attempts to circle behind the thundering behemoth. It's a prehistoric battle between two of the mightiest Pleistocene animals.