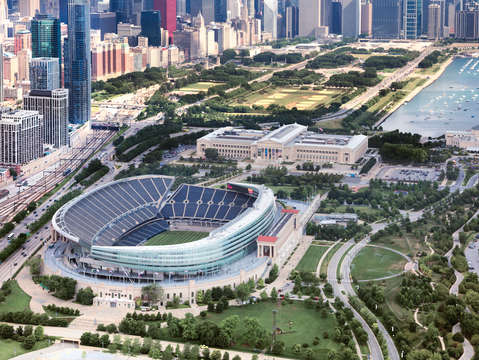 Soldier Field is an American football stadium on the Near South Side of Chicago, Illinois, United States. Opened in 1924, it is the oldest stadium in use by an NFL team. It will be the second-oldest when the Los Angeles Rams begin playing temporarily at the Los Angeles Memorial Coliseum, which opened a year earlier. Since 1971 it has been the home of the National Football League's Chicago Bears. With a football capacity of 61,500, it is the third smallest stadium in the NFL. In 2003, the interior underwent extensive renovation. On September 23, 2004, as a result of the 2003 renovation, a 10-member federal advisory committee unanimously recommended that Soldier Field be delisted as a National Historic Landmark.