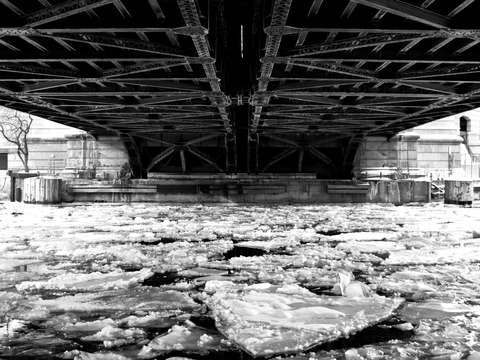 Chi-beria is a term coined by NWS meteorologist Ricky Castro (on his way to work) before the 1/6/2014 polar vortex outbreak. The City of Chicago and greater suburban areas reached AIR temperatures at around -15 degree Fahrenheit. Combined with even colder wind chills of down to -50 degrees Fahrenheit and about a foot of snow, social media controller for the NWS decided it would accurately depict the severity of the upcoming weather and cause people to take precaution. The word went viral via hastags (#) and became to be used as a term to describe Chicago during periods of extreme cold weather. Simple etymology consists of combining the names "Chicago" with "Siberia". It means conditions for the city will or currently rival conditions of Siberia, notorious for extreme cold and snow. -Source: UrbanDictionary

This was one of my first full winters in Chicago, and It. Was. Cold. But I loved it, and the visuals were absolutely stunning. It was also the first time (and so far the only) that I saw the entire Lake Michigan and Chicago River freeze over solid. Every winter you see ice, some more than others, but this was a truly other-worldly experience. I almost lost fingers and toes climbing all over ice and snow filled tundras to get what are some of my favorite shots ever in Chicago. This is under the Michigan Avenue Bridge on the Chicago River in the heart of Downtown Chicago.