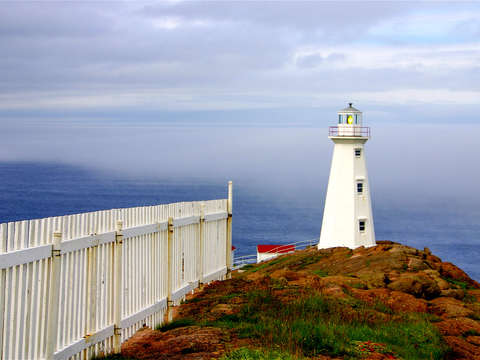 A lighthouse has operated at Cape Spear since September 1836. The original Cape Spear lighthouse was the second lighthouse built in Newfoundland; the first was built in 1810 at Fort Amherst, at the entrance to St. John's Harbour. In 1832, the first legislative assembly for the colony created a lighthouse board. Cape Spear was chosen as the site for a new lighthouse because it was on the rocky eastern coast near the entrance to St John's harbor. Construction began in 1834. The first lighthouse was a square wooden building with a tower in the middle containing the light. A foghorn was added in 1878. The first light used at Cape Spear had already been used since 1815 at a lighthouse at Inchkeith on the east coast of Scotland. This light used seven Argand burners and curved reflectors. This was later replaced by a dioptric lens system; the light was first lit by oil, then acetylene and finally electricity in 1930.