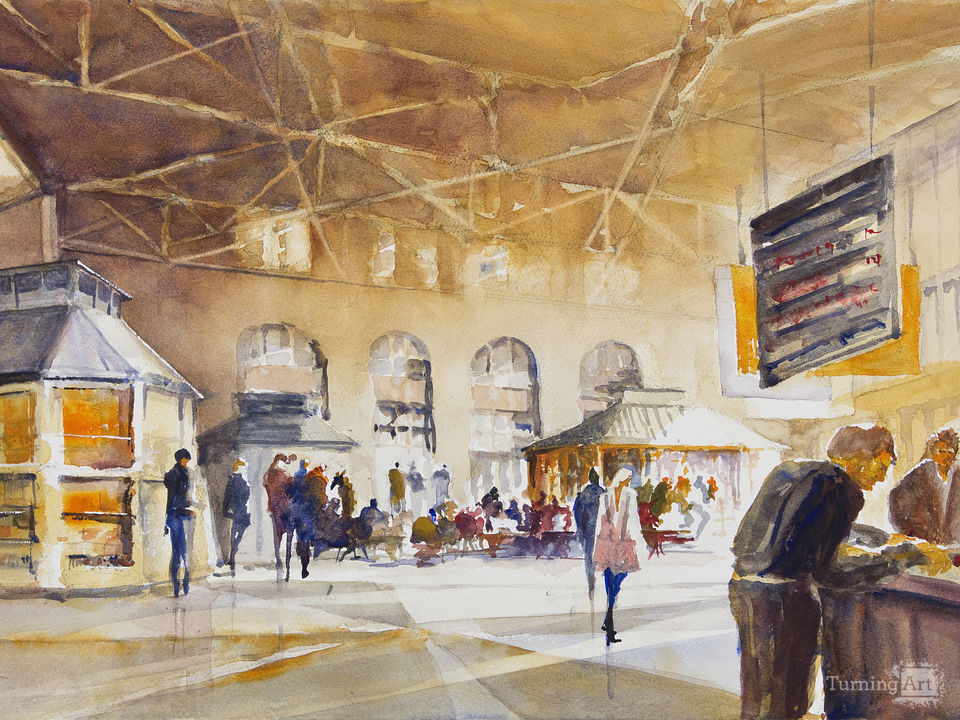 The waiting room at South Station in Boston is our equivalent to the great hall at Grand Central in New York. More than a room, it is a space in which visitors, commuters, sightseers and local residents mix and meet. Filled with light and motion, it energizes everyone who passes through on journeys both short and long.

Other works by Steven Foote

Steven Foote is an architect in practice in Boston since 1972, and since 2010 has studied painting with prominent watercolorists including Charles Reid, Mel Stabin and Alvaro Castagnet. As an artist he is fascinated with the public spaces in urban environments which, undesigned themselves, are the result of the design of buildings surrounding them. He refers to such spaces as the "living rooms" and "hallways" of cities, and his work explores ways in which people make them a part of daily life. The play of light is a constant in his work as he shows us how it shapes space, how people move through our cities as they go about their daily lives.

Steven carries a sketchbook, and records fast impressions of sights as well as color palettes. Often a final composition may include pieces of several sketches, combined for reasons of composition or effect.

He takes great pleasure in walking through exhibits of his work, without identifying himself, just listening to viewers as they converse about the scenes. Some of the questions he has overheard: "Are the people in that painting in a hurry?", or "Would you prefer to walk in the sunlight or the shadow in that painting? What do you suppose is around that corner?"