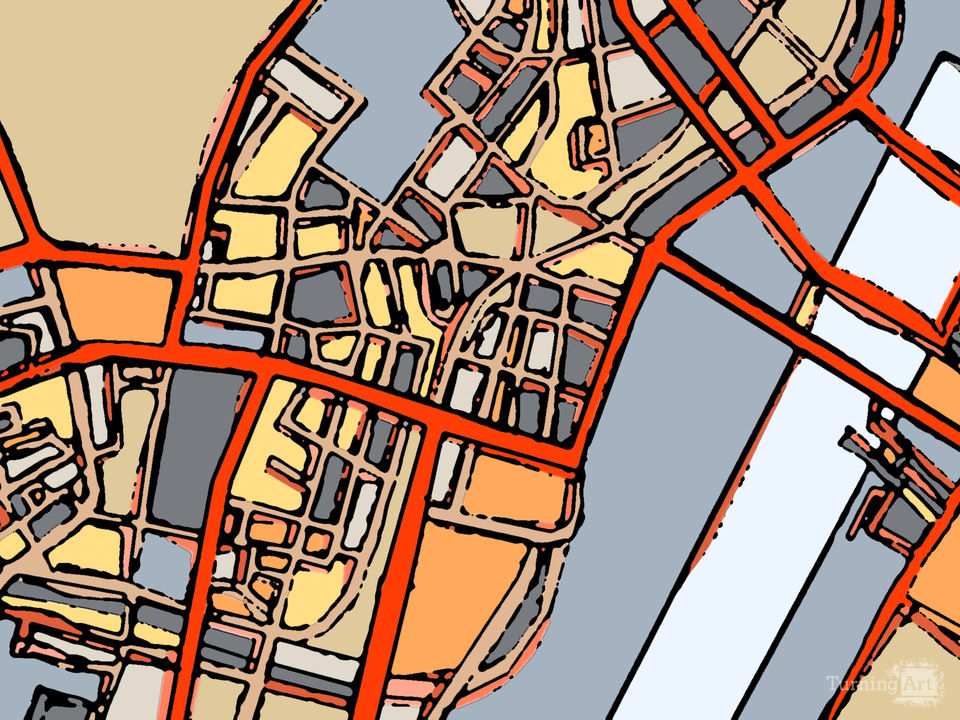 The image shows the area of south of Downtown Boston, in between South Station, Downtown Crossing and the South End. On the right side of the image you can see the Fort Point Channel in a very light blue. The three bridges crossing over are (from the bottom up): Summer St, Congress St, Seaport Boulevard.

The large pink area on the very top left is Boston Commons, and the other large blue area near the top let is the Downtown Crossing shopping area. Tremont Street is the main road running alongside the park, and it intersects with Stuart St/ Kneeland St, which runs horizontally across the center of the image. The two main roads running South from Kneeland St are Washington St (on the left) and Albany Street (on the right).

Other works by Jennifer Carland

Jennifer Carland is an artist who works with mixed media to create abstracted versions of aerial views and city maps. The work that she creates is loosely based on real geography and is abstracted so that the shapes, line, and color of the maps are altered to create a unique piece of artwork, showing an artistic representation of a real place.

Jennifer works with a variety of artistic materials and is fascinated by aerial views of the world around her. Each finished piece that she creates is of a map carefully selected for its geographical attributes and visual appeal then altered to create a unique piece of artwork. The finished product is a combination of hand-drawn and digitally altered images with many layers of colors and textures. The focus of her work is on interpreting the lines and shapes of a city map and changing the purpose of a map from utilitarian to conceptual. She intends to make the viewer think about their own place in relation to what is around them and appreciate the beauty in both the built and natural environments.