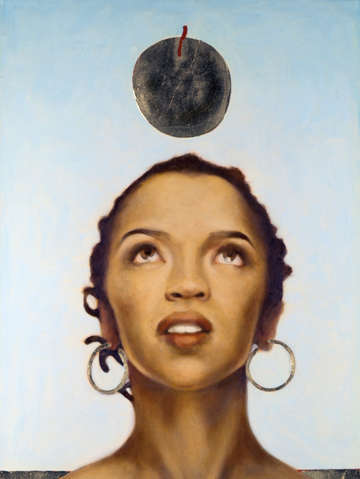 The Goddess of Love. Aphrodite was given the golden apple by Paris. … which led to the Trojan War.

From an ongoing series called "Oh My Gods!" which focuses on Greek gods & mythology. I was interested in contemplating what makes god & myth, playing with contemporary ideals versus classical. I think of them as a hybrid of advertising & fine art, aimed at resurrecting ancient mythologies. Some are famous, some more obscure. Images of ancient statuary such as Achilles & Athena are juxtaposed with painted interpretations of contemporary promotional headshots. A 1970s Jerry Hall, a 60s Paul Newman, or a 90s Danish ballet dancer (as well as a few others you may recognise). I was drawn to these Hellenic stories, because they are gods of imperfection, with human faults & frailties, compromised not of one supreme god, but an interlocking web, or soap opera, of major & minor players.