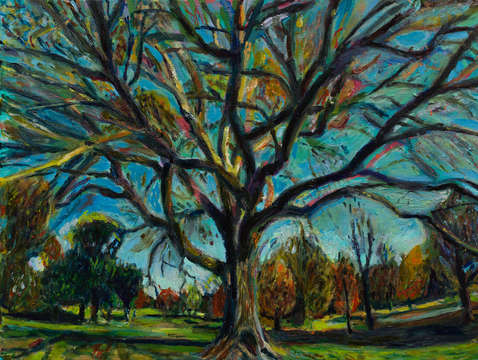 This American Elm is stunning in all seasons. I painted it in early spring. I was trying to capture a sense of an enormous tree enveloping the viewer from above. This painting is on a relatively smaller canvas.

American Elms used to be numerous in the American landscape, before Dutch Elm disease decimated the populations. Dutch Elm disease is a fungus that reportedly came over with a shipment of lumber from Europe. It is fatal for an American Elm, usually killing the tree in a single season. The first documented case in the United States was in 1930. One estimate states that 77 million American Elms died by 1970. This is a staggering figure, changing our notion of the American landscape forever.

This tree in Prospect Park is a relic of sorts, likely to become an increasingly rare site in the future. This summer, in 2017, I spoke with some park rangers who were inoculating a few elm trees as a protective measure. Dutch Elm disease had killed several trees in the southern area of the park. Let's hope their efforts at containment are successful.