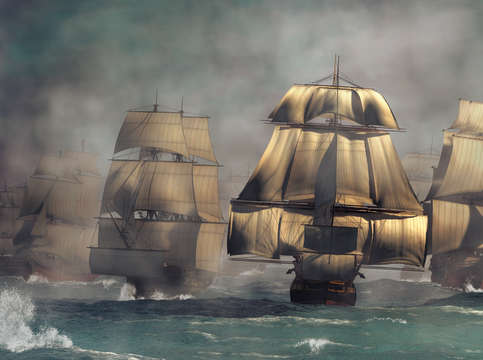 A fleet of heavily armed ships emgerges from the fog. Led by the massive ship of the line HMS Victory, they create a forest of sails in the ocean that dissappears into the distance. Around them, the choppy sea roils as they crash through the waves towards the viewer.

When I was growing up, my parents had a print of two ships shooting it out, and I always rather liked it. Marine warefare themed art is, of course, an extremely common subject. So I've seen quite a bit of it. I've expreimented a bit by creating works featurein the HMS Victory, but this is the first time I've tried multiple ships.

I created this image using CGI techniques as well as some digital painting applications.